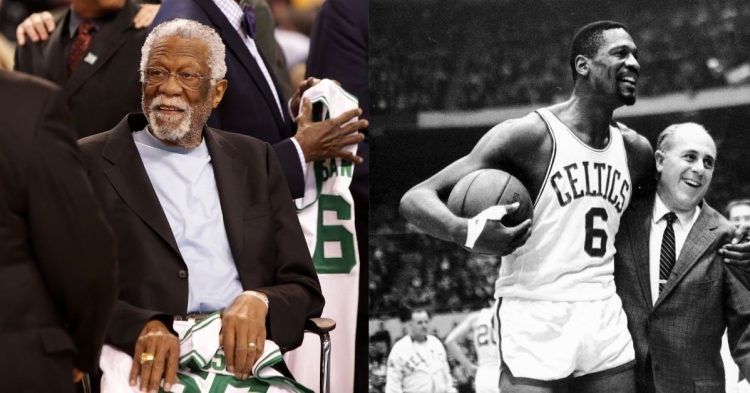 The late Bill Russell is an 11x NBA champion and one of the greatest players ever. He was definitely the most accomplished player the league has ever seen. Additionally, his success did not end when he retired from the Boston Celtics after a 13-year career.

Most NBA players struggle to have a full career. Moreover, barely a handful go on to do other things after their playing days are over. One must wonder what more Bill Russell could have done along with his accomplishments while playing in the league.

We as human beings live in bubbles that we call our reality. It is near impossible to fathom the problems our ancestors went through. Bill Russell was born on February 12th, 1934 in Monroe, Louisianna. Racial injustice and violence were very common. There are several reports from the early years of his life discussing the crimes the public committed against his family and community.

Charles Russell, Bill’s father decided to get his family out of their current situation. They soon moved to Oakland, California to pursue a better quality of life. Russell went to McClymond’s high school and then the University of San Fransisco for college. His game had significantly developed and he saw basketball as an opportunity to escape racism and poverty.

The 11x NBA champion also won the NCAA tournament when in college. Racism seemed to follow him at this point and his USF team was constantly taunted by the general public during games and in other situations. Russell claims that the acts of discrimination that he faced only urged him to become a better player.

The 5x MVP of the league developed freakish athletic abilities at a young age. He was even approached by the Harlem Globetrotters, an exhibition basketball team. However, he was not treated well and felt snubbed by them. Therefore, he declined their offer and decided to compete in the 1956 NBA draft.

The NBA helped kickstart a journey of excellence and selfless service

Most of us are familiar with what he accomplished in his 13-year NBA career. He was a 5x MVP, 11x NBA champion, and 4x rebounding champion. Additionally, he is also a 12x NBA all-star and 3x All NBA first team.

Russell has honorary degrees from reputed institutions such as  Suffolk University, Harvard College, and Dartmouth College. He was an intellectual and always looked forward to the future. The previous NBA commissioner, David Stern decided to honor him by naming the NBA Finals MVP the “Bill Russell NBA Finals Most Valuable Player award”.

These accomplishments are not all he has done for the league. He retired in 1970. The very next year, he joined “NBA on ABC” as a commentator on a show called “Game of the week.”. This gig did not last for too long and he returned to his true calling and became the first African-American head coach for the Seattle Supersonics in 1973. He was the pioneer of a new era in the NBA as coaches until that point were predominantly white.

Mr. Russell had already shown flashes of basketball intellect and was the player-coach for the Boston Celtics during his final years there from 1966-1969. A player-coach refers to a star on a team who coaches and plays at the same time. He even orchestrated a boycott in 1961. It is considered the first protest the NBA has ever seen. Here is why he decided to protest all these years ago

Bill Russell and the Boston Celtics were set to face the St Louis Hawks for a preseason game. The game was held in Lexington, Kentucky.  His teammates Thomas Sanders and Sam Jones went down to the cafeteria to get something to eat. They were discriminated against by the catering staff who stated ” We can’t serve you people”

This led to Russell and the other players feeling enraged at the rampant mistreatment of people of their skin color. They spoke to their coach Red Auerbach. He tried to push back and insist that they go through with the game. The players, led by Bill refused to do so and boycotted the game, choosing to fly back to Boston instead of playing where he and his teammates were badly treated.

This was the first NBA boycott against growing racial prejudice and the first time athletes decided to fight back against the system that they are a part of. Mr. Russell was responsible for this and is considered a pioneer of change for the same reason.

After his coaching career, he became a color commentator for CBS and TBS. He soon went on to become a guest on TV shows such as “Saturday Night Live” and even wrote a few books. “Russell’s rules” is one of his best sellers and is certainly worth a read.

The outside world seemed to acknowledge him greatly as well. He was awarded the Presidential medal of freedom in 2010 and even had statues erected in his honor in Boston. They represent the 11 championships he has won with the franchise. These are the incredible contributions of Bill Russell to the NBA.