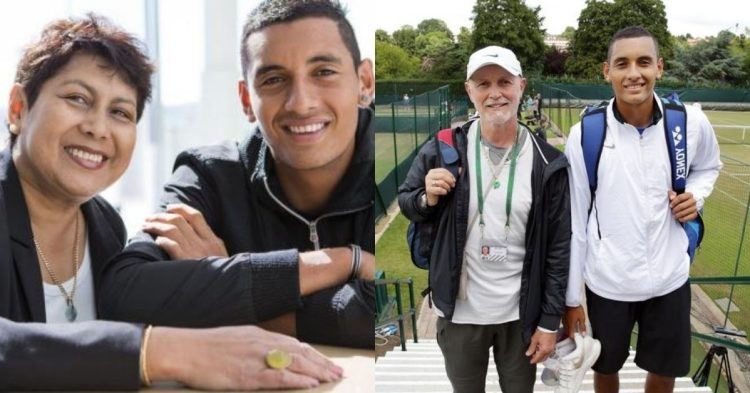 Nick Kyrgios lost the Wimbledon final against Novak Djokovic in his attempt to win his maiden grand slam title. During the course of the past two weeks, tennis fans have seen a lot of skill and drama from his side. However, one thing that has remained constant is the support of his family.

Kyrgios is always seen staring at his booth to seek the support of his family members. His side always has his girlfriend Costeen Hatzi along his with father Giorgos and sister Halimah. All of them were present even during the final. Sadly, they saw Kyrgios losing the match but it was still a proud moment for them.

Nick Kyrgios’ parents are not originally from Australia

While Kyrgios was born in Canberra, his parents are not originally from Australia. His father Giorgos hails from Greece while his mother Norlaila ‘Nill’ was born in Gombak, a district in Selangor, Malaysia. Therefore, it is fair to say Kyrgios comes from a multi-ethnic background.

Interestingly, Norlaila comes from the Selangor royal family in Malaysia and even had the title Tengku of Pahang, or princess of the Pahang state. However, she dropped the title when she came to Australia.

Norlaila came to Australia in her 20s and studied engineering to become a computer engineer. She eventually met Giorgos, who was a self-employed house painter and the rest is history. The two have two more children- Christos and Halimah who are elder to Kyrgios.

Christos suffers from alopecia and Kyrgios is very protective of him. Christos is engaged to his partner Alicia Gowans. The couple recently welcomed baby boy George and Nick has shared many photos with his nephew. Halimah, on the other hand, is dating fellow tennis player Dustin Brown in the past. She is a professional singer and has been part of The Voice Australia.

You might have noticed the absence of Kyrgios’ mother in the stands. That is because she had a heart problem and watching Kyrgios play makes her very nervous. In a past interview to abc.net.au, Norlaila said, “I don’t watch Nick play. I’m just too nervous. I get too scared. I’m just hopeless – I tend to hide.”

V
Nick Kyrgios’ mother CAN’T watch his winning run at Wimbledon because seeing him play gives her so much anxiety she had to see a psychologist for six months
======https://t.co/8PDW9PI5C1 pic.twitter.com/FCxfIKH2yN

His mother’s heart condition is quite serious and it even led to some controversy from Kyrgios’ end before the Australian Open in 2021. Kyrgios had argued at that time for the cancelation of the tournament to avoid the possibility of a COVID outbreak.

Due to his mother’s heart problem, he feared the complications she might face if she contracted COVID. While his mother watched him live on television, he got the support of his father and other family members from the stands during the final against Djokovic.