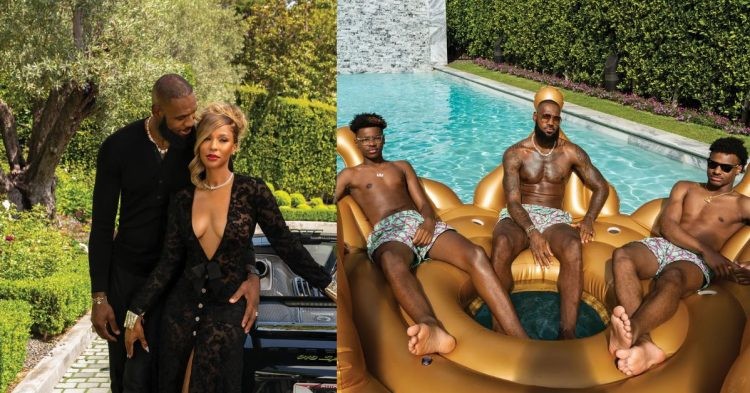 In the NBA, we have had many celebrity families. LeBron James and his beautiful family are surely one of them. LeBron has three children with wife Savannah: Bronny, Bryce and Zhuri. His boys have caught our attention many times in recent years. This year, they shared the court for the first time at the Axe Euro Tour. Day by day, it only seems more than likely than they are going to play in the NBA at some point.

However, their mother Savannah has shocked the world with her recent comments. In the October 2022 issue of Vanity Fair, she revealed a secret about her son. “Bryce, 15, Savannah lovingly calls “the mystery of the family,” insofar as he could go in any direction, though he’s also a much-hyped basketball prospect himself,” the article mentioned.

When talking about Bronny, Savannah said, “getting to a place to start to make decisions about his career and where he wants to go in his life.” Recently, the James family came together for a first-ever family photoshoot, in their home in LA.

Will LeBron James be able to achieve his dream of playing with his sons Bronny and Bryce in the NBA?

We all know that LeBron’s wish is to play with his sons in the NBA. As he is entering his 20th career and is nearing the end of his career, that’s starting to look unlikely. However, if King James’ evolution has taught us one thing, it is that we should never doubt the man.

The chances of Bronny playing in the league is extremely high. He is one of the best high-school basketball players. However, his brother isn’t too bad himself as well. Bryce is currently 15, and he stands at 6 feet 6 in tall right now. For a teenager in his high school years, that’s unbelievable. Moreover, Bryce is still growing. When he turns 19, he would have to decide if he wants to enter the NBA draft.

From what Savannah said, he may still be deciding what he wants to do in the future. But basketball is still a door that will be open to him. He has become a celebrity for the plays he shows on the court, together with his brother. “With LeBron being their dad, it’s just automatic. It’s not something we’ve pushed or told them that they had to do, or anything like that. It just happened,” Savannah mentioned.

Bryce is still young, and he may still decide if he wants to play in the NBA. However, there is a high chance that his dad’s wish will also be a determining factor when he decides. Regardless, it is evident that the James brothers have the talent to make it in the NBA, just like their legendary father did.