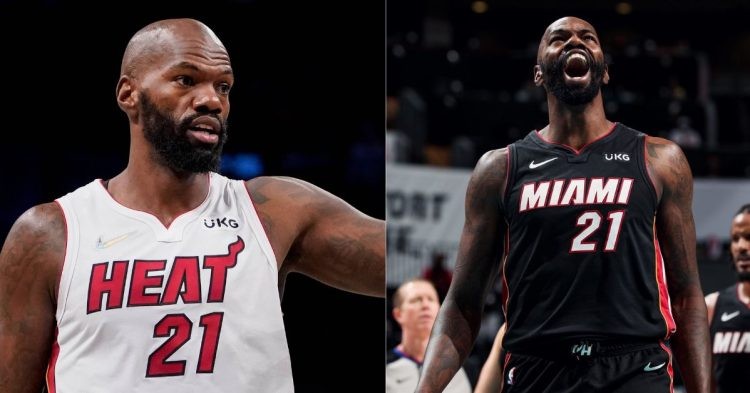 The topic of Jehovah’s witnesses in the NBA has been trending all over the world in recent times. Thanks to stand-up comedian Brittany Schmitt, the world now knows that there are only three NBA players who are/were Jehovah’s witnesses. They are Darren Collison, Danny Granger, and Dewayne Dedmon. It seems like Danny Granger might be the ex that Schmitt was talking about, as fans think he is the “Light-skinned” one.

Dewayne Dedmon is the only active NBA player to be a Jehovah’s witness. Dedmon’s parents were also Jehovah’s witnesses, according to various reports. They raised their son to follow the same faith as he grew up and became an NBA player. He currently plays for the Miami Heat as a center and wears the number 21 jersey for the franchise. Let’s take a closer look at his career so far.

An interesting fact about Dedmon’s early basketball career is that he did not play basketball until he reached his senior year. The reason for that was simply because his mother did not allow him to. She was also a Jehovah’s witness and feared that basketball would take the focus off religion for her son. Before his final year of college, Dewayne decided that he was going to enter the NBA.

After going undrafted in the 2013 NBA Draft, the American signed for the Miami Heat and then the Dallas Mavericks. This was so that he could play in the Orlando Summer League and the Las Vegas Summer League respectively. Later on, Dewayne signed with the Golden State Warriors. The board waived the player after he featured in only a few games in the preseason.

After that, the Warriors re-signed him and waived him a couple of times before the Santa Cruz Warriors signed Dedmon as an affiliated player to the GSW franchise. He stayed with them until the start of 2014, before the Philadelphia 76ers signed him on multiple 10-day contracts that time around. Unfortunately, he played for them for a few games but was released by the Sixers board.

Dedmon has played for numerous NBA teams across his career

Throughout his career, Dedmon has played in 507 games in the regular season and playoffs. According to statmuse, he has averaged 6.3 points, 5.8 rebounds, and 0.8 blocks in his NBA career. The 33-year-old’s best season came when he averaged 10 points and 7.5 rebounds per game, for the Atlanta Hawks in the 2018-19 NBA season.

For the Miami Heat, Dwayne has managed to make 6.4 points, 5.7 rebounds and 0.7 assists per game in 83 games so far. He may not seem like a standout player for the franchise, but it seems like he gets the job done when he plays in his favored position.
Tags: Dewayne DedmonMiami HeatNBA
Previous Post