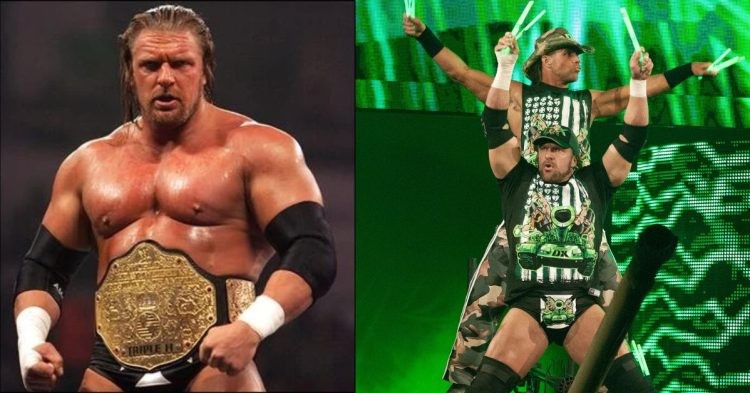 Why WWE Changed Triple H’s Name Upon His Debut

When Triple H transitioned from WCW to WWE in 1995, he went by the name Hunter Hearst Helmsley. Two years later, as a member of the D-Generation X faction, the name of the future 14-time World Champion was modified to Triple H.

"We were getting threatened to be fired every week." 🔥 @WWE Legend @TripleH on how DX nearly got WWE taken off the air#SPORTbibleStories pic.twitter.com/9ilVqQLUo8

According to the head writer for WWE in the late 1990s, Vince Russo The company’s executives didn’t want Paul Levesque to be known as Triple H in his initial years with the organization. He claimed that the reason WWE first rejected the proposal was that HHH was thought to be too close to Arn Anderson of WCW, better known by the moniker “Double A”: “They really, really, really were hesitant,” said Russo. “He wanted to be called Triple H and the office was hesitating because of Double-A, Arn Anderson, and they wouldn’t allow Hunter to call himself Triple H. I’m like, ‘Bro, it’s two completely different things.’ It was a fight at the beginning. They did not want him to refer to himself as that.”

He claimed that when he moved to the WWF, Vince McMahon was a little worried that the gimmick would make it tough for Triple H to flip babyface at any point in the future. He was first featured in WCW as French aristocrat Jean-Paul Levesque.

Triple H said, “Vince liked what I was doing and the character, but he wanted me to be American. I didn’t know what the name was at first, so they brought me to Columbus, to TV, just so I could meet everybody and get to know all the guys a little bit. They had asked me to think up a bunch of names to give some input on it and I had a whole bunch of names in mind. and J.J. (Dillon) called me into the room and said, ‘We’ve got your name. You’re going to be Reginald DuPont Helmsley’ and I was like, ‘Holy cow! Here I am in the bad name category again!'”

Triple H reveals the story of how DX was formed

A forthcoming episode of WWE RAW will feature Shawn Michaels and Triple H to celebrate the 25th anniversary of D-Generation X. During the Attitude Era, Triple H and Shawn Michaels forged one of the most iconic groups in company history. DX soon gained popularity thanks to its humorous segments and raunchy nature. They also took part in one of the most well-liked episodes in the history of the network.

According to Michaels, DX was eventually created as a result of the excitement he and Triple H had while traveling. Micheals added, “We would ride in the car together and say “My goodness if we could just bring who we are in the car out on TV. We finally convinced the powers that be to give us a chance. We just went out there and hammed it up, because we naturally bring that out of each other. The humor was sophomoric, but that’s who we were back then.”