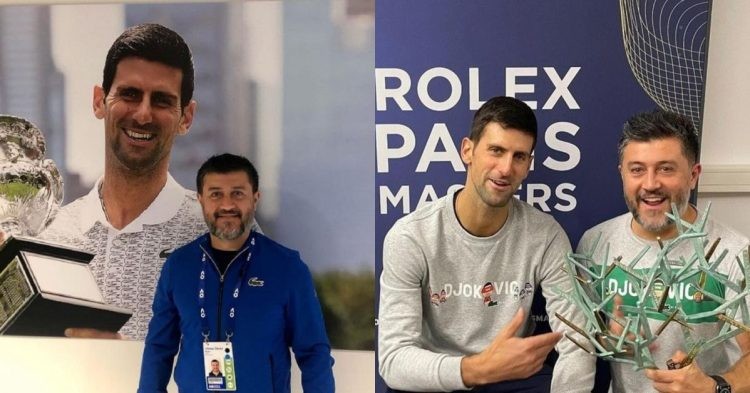 Novak Djokovic recently won his 21st grand slam and extended his legacy in tennis. Many people credited his coach Goran Ivanisevic for his Wimbledon win. However, Djokovic’s success is not just limited to his coach, but also his team. Apart from Ivanisevic, his team consists of his fitness trainer Marco Panichi and physiotherapist Ulises Badio.

In a recent interview for Diario Sur, Ulises Badio revealed that he tracks Djokovic’s every activity as every small detail can affect his game. Furthermore, he said, “I follow him constantly, even when he’s sitting, to see how he’s standing, how much water he’s drunk or whether he’s been on the phone with someone for a long time: every little thing is important and can affect the game.”

Badio always wanted to work with the best and that is when he came across Djokovic. However, he has to be very careful while dealing with the Serbian as there is always the risk of getting hurt. For someone playing at the level of Djokovic, the stakes are very high and the scope for mistake is very low.

Moreover, Badio said, “The responsibility for a tennis player like Novak is 200%. When you treat an athlete at such a high level, you can always be on the verge of hurting him. You have to know in detail both his anatomy and your profession.”

Even though Badio works for Djokovic, they share a very close friendship. Over the years, the two have developed a friendship so close that they are practically family now. The close relationship has helped Badio in giving his best to help Djokovic achieve his goals in tennis.

Badio further said, “When I came to the team, I knew how I had to work and what my job was. But I don’t know what role I had in the team. Novak and I formed a strong bond and we got to know each other from the start. There was an important connection between us.”

As far as Djokovic and his team are concerned, everything seems uncertain as of now. After his Wimbledon glory, fans might not see Djokovic at the US Open. Since he is unvaccinated, he is not allowed in the US as per the current travel guidelines of the US.