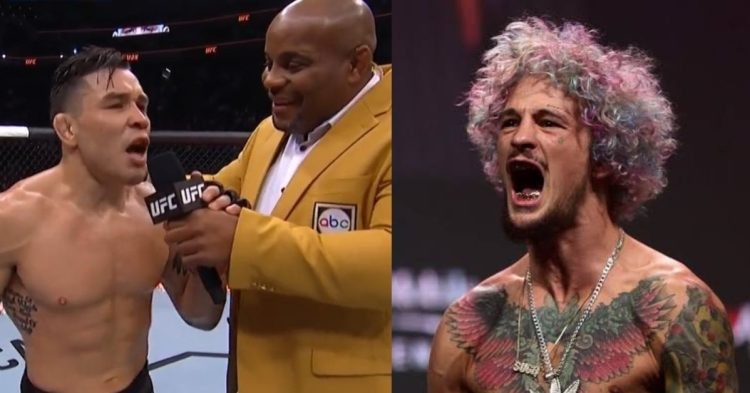 Ricky Simon squared off against Jack Shore in a three round fight that took place in the prelims of UFC Fight Night: Ortega vs Rodriguez. Leading into this fight, this was anticipated to be a close matchup and one of the biggest tests for Simon as Shore was yet to defeated in his 16 fight professional MMA career.

However, the 29 year old bantamweight contender made it look extremely easy as he ended Shore’s undefeated record in the second round via submission. Speaking about how the fight played out after a close first round, both Shore and Simon traded some blows and during one of the exchanges, Ricky hurt Jack Shore with a counter right hand and dropped him.

Thereafter he skillfully controlled Shore on the ground and converted into a mount position and submitted him via arm triangle. With this brilliant win over Shore, Ricky Simon has extended his winning run to five consecutive wins.

Consequently, after picking up a big win, Simon was hyped and in the post-fight interview, the #13 bantamweight contender was asked by Daniel Cormier who wants to fight next. To which, Ricky called out Sean O’Malley and announced his arrival to the 145-pound division.

“O’MALLEY! THE SUGA SHOW IS OVER!”

“I’M THE SWEETEST IN THIS DIVISION!”

“O’Malley! The Suga Show is over. I’m the sweetest thing in the bantamweight division,” said Simon in the post-fight interview.

Will the UFC matchmakers book a fight between Sean O’Malley and Ricky Simon next?

Fans and fighters around the world were highly impressed by the performance of Ricky Simon against a tough opponent like Jack Shore at UFC Fight Night. It is needless to say that everyone wants to see a matchup between O’Malley and Simon as these two bantamweight’s are extremely dangerous and skillful fighters.

This fight makes perfect sense given they are ranked next to each other and are on a terrific winning run. Subsequently, there is a high possibility that the UFC matchmakers will schedule this fight as O’Malley’s last fight ended in an anti-climatic manner.

As of now, Suga Show has not offered his response to Ricky Simon’s callout. It would be interesting to see how things move forward in this stacked bantamweight division as there are many exciting fighters who are highly entertaining to watch.