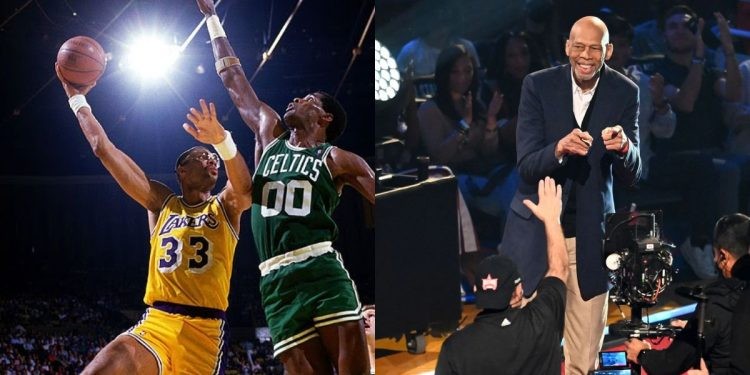 Kareem Abdul-Jabbar, a 6 times champion, 6 times MVP winner (the most in NBA history),  recently appeared on The tonight show starring Jimmy Fallon to promote his charity The Sky Hook Foundation.

During the interview, he was asked to settle some of the biggest and most important debates.

At first, the questions were what you would expect on a talk-show; “Summertime Basketball, Indoor or Outdoor”, to which Kareem replied “Indoor, because it won’t rain and the sun won’t beat you up.”

However, when Jimmy Fallon asked Kareem Abdul-Jabbar about the best hot dog topping, the 6 times champion had other plans.

He replied, “The tears on 1985 Celtics when they lost to the Lakers in the finals” to which the crowd erupted in laughter. Even Jimmy Fallon stood up laughing at Jabbar’s savage reply.

The Lakers and the Celtics rivalry is the biggest rivalry in the NBA. Even though both teams right now are tied in the total number of championships (17), the rivalry still continues in Kareem’s mind to date.

After the Lakers lost to the Bird’s Celtics in 1984, the Celtics and the Lakers were set to meet up again in the NBA finals.

In game 1, the Celtics blew the Lakers off the court with a score of 148-114 which is famously known as the “Memorial Day Massacre”.

Regardless of a blowout, the Captain, Kareem Abdul Jabbar had different plans. At the age of 38, in his 16th season, he gave a performance of a lifetime. He went on to score 30 points, 17 rebounds and 8 assists to even the series at 1-1

Jabbar followed it with 26 points with 14 boards and 7 assists with a win to take the lead in the series.

The cap took over the series and became the oldest player to win the Finals MVP. He averaged 25.7 points per game on 60% shooting, 9 rebounds, and 5.2 assists with 1 steal and 1.5 blocks per game.

Kareem Abdul-Jabbar in the 1985 finals:

Won finals MVP and was the best player on a star-studded floor at age 38. pic.twitter.com/aX1pmRku0L

1985 legitimized Kareem’s career. He won his 2nd Finals MVP and his 5th championship to cement his name as the greatest center to ever live.