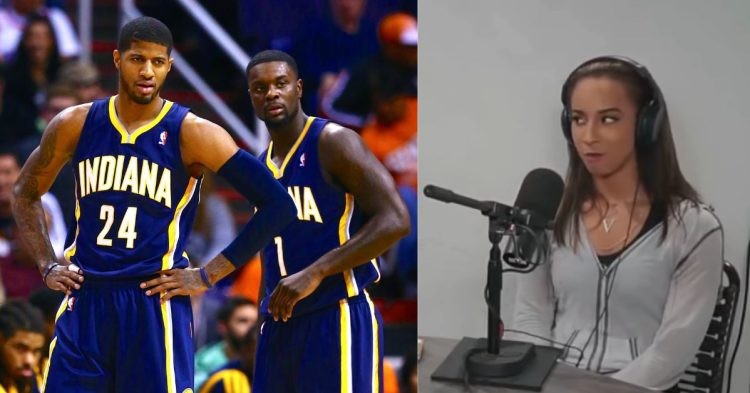 Paul George and Lance Stephenson on the court and Teanna Trump in an interview (Credit: YouTube)

NBA fans might not be aware of who Teanna Trump is. She is an actress in the adult film industry and is quite popular. Additionally, she has a huge fan following on Instagram of 1.4 million people. Teanna recently made waves in the NBA world by drawing attention to a criminal act that was committed in her past.

She referenced an Indiana Pacers player back in 2013 but did not exactly reveal his name. One must wonder more about the context of this situation, what crime was committed and what she is saying at this point in time. If we listen to her narrative, a better understanding and clarity will follow.

Teanna recently sent out a tweet accusing an OKC player of owing her money. She soon deleted it afterward. That would make this the second time where interactions with an NBA player did not go properly. She revealed that there was an NBA star on the Indiana Pacers, who was responsible for her getting into the adult film industry.

This is quite a scandalous accusation. However, she did not reveal the name of the player and left us speculating on what happened. Here is what Teanna had to say about the player from the Pacers.

“So the person that, like, got me, got me, got me into p*rn was a Pacers player…I was 16 years old, he hit me up on Instagram. We had pictures, we had videos of me 16 and having s*x with this man.”

Teanna went on to explain that he did not falter in his approach despite knowing that she was only 16 years old at the time. While this sounds sick, we should remember that Indiana laws consider 16 to be the age of consent.

In an interview with No Jumper, Teanna Trump said she had sex with an Indiana Pacers player when she was 16 years old.

That is why this Indiana Pacers star was able to get away. If we assume that she is telling the truth, we should wonder which of the 2013 Pacers players it could be. NBA fans will remember that Paul George, Lance Stephenson, George Hill, and others were on the team at the time.

Paul George was certainly the biggest star in the group. However, we should not be quick to presume it is him for that reason alone. In any case, since she has not revealed the name of the player, we are forced to make speculations.