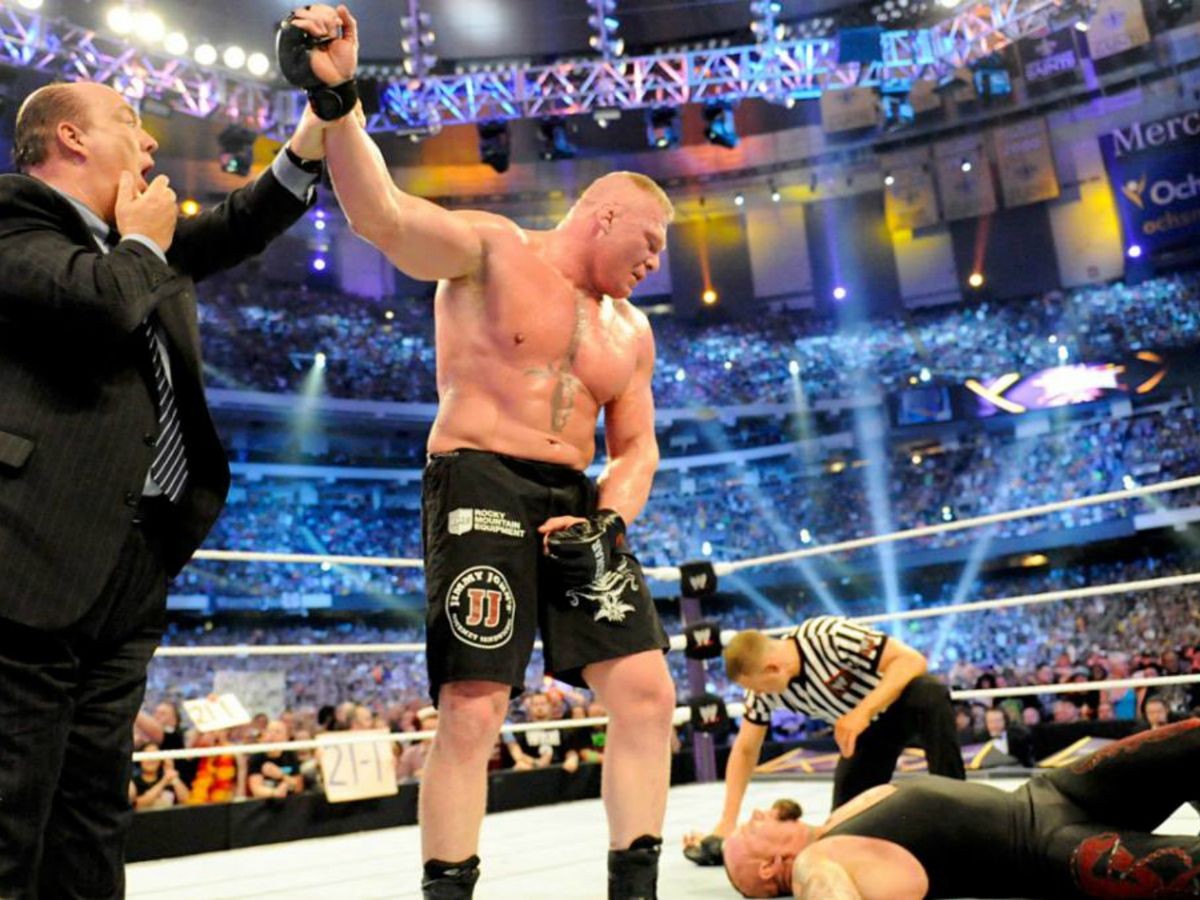 The beginning of the Undertaker’s Streak

the WrestleMania Streak started in 1991. The Undertaker was four months in since his WWE debut. He was put in a match against Jimmy “Superfly” Snuka at WrestleMania VII. He won the match after dropping Snuka with a Tombstone Piledriver. In his first year, Undertaker aligned himself with Jake “The Snake” Roberts and feuded with both the Ultimate Warrior and Hulk Hogan.

Undertaker had some of the greatest matches at WrestleMania with both members of D-Generation X, Triple H and Shawn Michaels. It was a great storyline that stretched out to four WrestleManias. The DX duo came the closest to breaking the streak. It culminated in WrestleMania 28 as the Undertaker was able to save his streak and all the performers embraced each other as they neared the twilight of their careers.

Fans thought that the Streak was sacred to WWE. Every year, the ‘Mania card would be unpredictable due to the nature of the wrestling business. But the fans were always excited to see who came next to try and break the Streak at the biggest show of the year. It became an event that fans can only experience at WrestleMania.

The end of the Streak at WrestleMania 30

The 30th edition of WrestleMania was filled with mixed emotions. Daniel Bryan would make history by defeating 3 superstars in one night and Brock Lesnar would break the Undertaker’s undefeated WrestleMania streak. Prior to his defeat, the Undertaker had 21 wins and 0 losses at ‘Mania.

The reaction to @BrockLesnar breaking The Undertaker’s winning streak (21-0) at #WrestleMania30 ???? pic.twitter.com/nYGYTeZAQo

Lesnar returned in 2012 after a successful stint with the UFC (Ultimate Fighting Championship). He would dominate John Cena in his return solidifying himself as “The Box Office Guy” in WWE.  On paper, the match between Undertaker and Brock Lesnar sounded exciting. It went haywire when Undertaker suffered a concussion early on in the match.

It was a slow and plodding match, and it looked as if Undertaker would be better off retiring. Twenty-five minutes into the match, Lesnar reversed a Tombstone into yet another F5 and pinned the Undertaker to win the match.

Why was the decision taken to end The Undertaker’s WrestleMania streak?

The end of the Undertaker’s streak came across as a shock to the whole industry. Wrestling Observer Radio’s Dave Meltzer stated that the decision to end the streak was made on the day of WrestleMania 30. He added that WWE did not believe the Undertaker would be able to perform in a marquee match at future WrestleManias. In an episode of the Broken Skulls Session podcast, Vince McMahon was asked about the Undertaker by “Stone Cold” Steve Austin.

He talked about the Undertaker (Mark Callaway) always wanted to perform whenever he can. But wrestlers are not immortal and McMahon acknowledges that fact. He thought that the time has come for the Undertaker to end the Streak. Brock Lesner seemed to be the only legitimate contender to do so at that point of time.

“Stole My Moves!” – The Undertaker Jokes About Kane During Hall of Fame Induction Following WrestleMania SmackDown