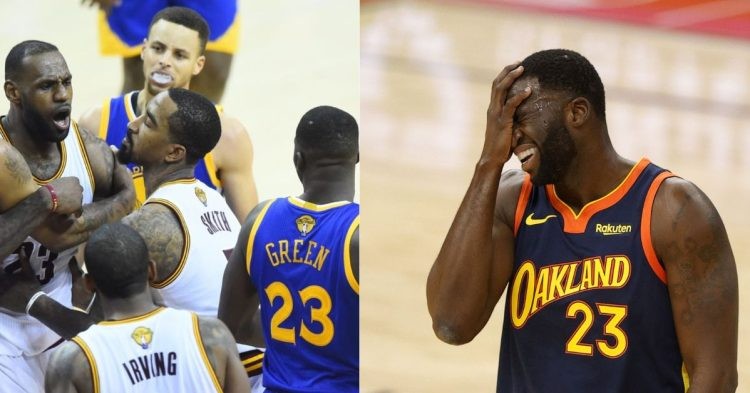 Draymond Green is the defensive backbone for the Golden State Warriors. In fact, he has boldly proclaimed himself to be one of the greatest, if not greatest defenders of all time. There is no arguing that Draymond is quite a handful on the defensive end. He has made a reputation for himself as an irritant and an enforcer on the court, much like the Los Angeles Lakers’ Patrick Beverley.

The Warriors star recently revealed that he feels the league is treating him differently after his scuffle with LeBron James many years ago. The NBA grows and has new fans being introduced to the sport every year. Therefore, many people will not remember where all of this began for Draymond Green.

In this world, all of us have a tendency to make comparisons. “What I did was nothing compared to that” is something that everyone feels on occasion. It would shock some people to know that Draymond initially earnt a reputation for kicking people in the groin area.

Of course, Green would claim that it was an accident and bygones would be bygones. Here, he claims that after his suspension back in the 2016 NBA Finals, the league is looking at him differently. Additionally, he claimed that what Cavs rookie Evan Mobley did to LeBron James is a lot worse.

You can decide for yourself which play is worse. In any case, it is foolish to say one wrong deed is worse than the other. Mobley is a youngster who has just begun his career in the league. An irrational and dangerous style of play is more likely seen in a young player than in a veteran like Draymond.

We should wonder whether the league has treated him differently since 2016. This season, he had 82 fouls in the regular season. Moreover, he fouled out twice in the NBA Finals vs Jayson Tatum and the Boston Celtics.

If he truly believes and is confident that the league has been discriminating against him for years, he should take this up with NBA commissioner Adam Silver. Draymond Green has clearly not done that.