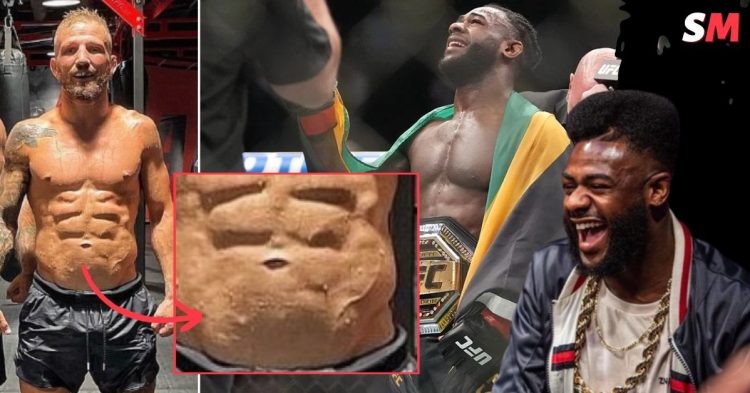 TJ Dillashaw and steroids will always be a story! The two-time bantamweight champion got popped for PEDs after his disastrous TKO loss against Henry Cejudo when he dropped down to the flyweight division in an attempt to become a two-division champion.

Dillashaw tested positive for one of the most dirtiest drugs an athlete can take to gain an advantage over their opponents after his urine sample popped for recombinant human erythropoietin (rHuEPO) aka EPO. Several UFC fighters came out on social media and claimed in various interviews that Dillashaw has been using steroids for as long as one can remember.

Ahead of a historic night at UFC 280, where TJ Dillashaw will look to become a three-time bantamweight champion of the world, current Champion Aljamain Sterling has gone on to state that Dillashaw is cheating and has made peace with the fact that he might be on some kind of steroids come UFC 280.

Recently, a fan tweeted a photo of TJ Dillashaw from training ahead of the title fight and claimed TJ Dillashaw might be on steroids again.

Is TJ Dillashaw on steroids for UFC 280? Fans seem to think so

In the photo doing rounds on the internet, TJ Dillashaw looks visibly old and has the fans convinced that the former bantamweight champion is on steroids once again.

Not only does he look elderly, but he also looks like he’s on the sauce again. Look at all those bumps on his abdomen. If he pops again I’m literally gonna start dying laughing pic.twitter.com/IL2BZh1iPG

“Look at all those bumps” a fan noted, pointing to what could possibly be beads of sweat. Several fans came out supporting TJ Dillashaw, calling the “bumps on the stomach” nothing but “sweat” after training. The photo is from the gym, but it’s hard to ignore that Dillashaw does look a little older than we last saw him.

Check out some reactions right here.

They do a little bit but giving TJ’s history plus how bad his last performance was, I wouldn’t be surprised if he decided to do PED’s again.

The guy who got caught for PEDs before surely wouldn’t do it again right? 😂

Probably but just going off his track record I kinda assumed

Probs sweat, but yeah I’m not going to be surprised if it’s PEDs again lmao

While most of the fans may have taken Dillashaw’s side on this one, almost all of them also noted that they wouldn’t be surprised if the former bantamweight champion does get tested positive for PEDs after UFC 280.