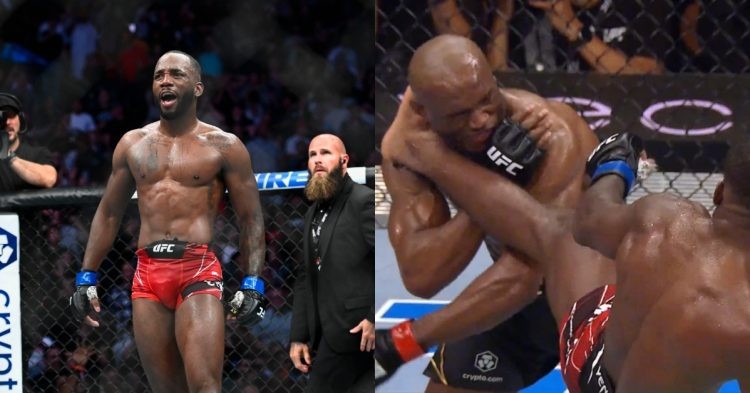 UFC 278 is officially in the books and Leon Edwards just put the perfect finishing touch on it. Almost all the bouts on the card went as the fans thought they would. However, the MMA god had an ace up his sleeves.

The no. 1 pound-for-pound fighter Kamaru Usman took on Edwards in the main event of the PPV and the contest was playing out just the way it was supposed to.

Although Leon took Usman down for the very first time in his career in round 1, Usman came back in a strong way. Kamaru answered by landing multiple takedowns of his own. He dominated round 2, round 3 and round 4. The story was also the same round 5 as Usman was rag-dolling Edwards for the major part of it.

However, the ref Herb Dean made the fighters stand up in the closing minutes of the final round as he wanted to see more action. And some action he saw! Leon knew that he was definitely going to lose on the cards if the bout went the full distance. So he took a chance and tried to trick Usman to lean on his right after faking a punch.

STRUT IT OUT @LEON_EDWARDSMMA YOU JUST DID THAT! #UFC278 pic.twitter.com/SzNt89ux73

Kamaru Usman took the bait and that was his downfall. Leon landed a massive kick which connected right on Usman’s chin and knocked him out cold. Although Gilbert Burns rocked Usman previously, Edwards becomes the first fighter to defeat him via KO and what a finish it was!

Before the finish of the fight, all 3 judges had the fight 39-37 heading into the 5th round. So it can be dubbed as one of the best coming from behind wins in UFC history.

Leon Edwards was understandably emotional after his win over Kamaru Usman at UFC 278. The odds against him were astronomical heading into the 5th round. A win for him seemed almost impossible with just 56 seconds left in the bout. But he certainly believed in himself and got the job done in the most spectacular way possible.

His nickname is Rocky and Leon certainly accomplished something that is straight out of a movie. Following his win, the Rocky anthem from the famous boxing movie was playing in the arena. It was certainly the fitting way to end the night which saw the underdog overcoming a massive favourite.

Leon is now the only fighter to knockout Usman in his career. But there is no doubt that Kamaru will be hungry for revenge in their next fight. It looks like an immediate rematch is the way to go for the UFC.