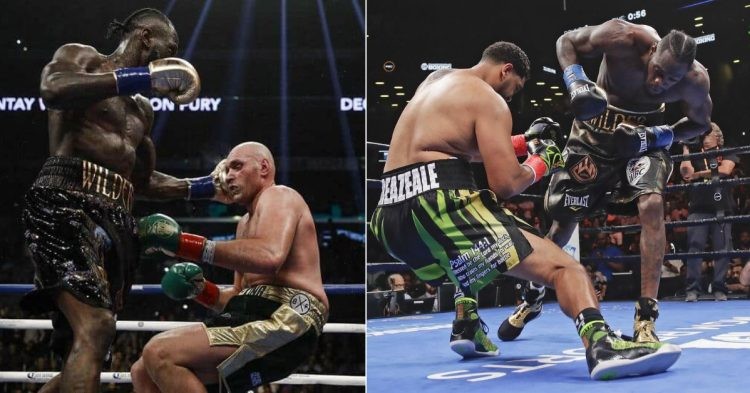 Despite a stellar record of 42 wins, 1 draw, and just 2 losses to his name, Deontay Wilder is yet to earn the respect of boxing fans around the world. While his KO power is well-regarded by many, fans are yet to accept that Wilder is one of the greatest boxers to ever step inside the boxing ring.

Moreover, they aren’t even convinced he is one of the hardest punchers in the world of boxing despite some vicious knockout victories to his name. Additionally, it won’t be wrong to say that back-to-back stoppage losses against Tyson Fury have also tarnished his legacy and fans are of the idea that Wilder was fed with waiters and cab driver during his title reign as the WBC Heavyweight Champion of the world.

“100%. I don’t believe Wilder’s ever faced a puncher like me in his whole career. Don’t forget Wilder fought 35 bums. 34 actually. Cos’ he’s had about five real fights.” Fury had said ahead of their rematch. The Gypsy King also argued how a “147-year old” Luis Ortiz gave Wilder a good fight and was possibly winning on the scorecard before getting knocked out.

Deontay Wilder is one of the greatest boxers of all time

While there’s some gravity to Tyson Fury’s statements, the Gypsy King’s opinion of the Bronze Bomber has changed over time. Having fought him thrice in his decorated boxing career, and getting caught by Wilder’s vicious right hand on numerous occasions, Fury now believes Deontay Wilder is the second-best boxer in the world today.

“Deontay Wilder is the second-best heavyweight in the world. I believe he knocks Anthony Joshua out and everyone behind me,” Fury told Dev Sahni on The Lockdown Lowdown.

It’s one thing to say Ortiz fared well against Wilder, but another to say he beat him. Well, because he did not. It’s hard to deny the ferocity and fire inside Deontay Wilder whenever he steps inside the boxing ring. Fury, who has fought him thrice truly understands that and acknowledges that it’s not easy to beat Wilder.

“Everybody else out there, I think he knocks them out because me being a master boxer and people think ‘just go forward on Deontay Wilder now you knock him out.” Fury had said in the lead-up to his trilogy fight with Deontay Wilder.

It’s easy to criticize Wilder’s professional boxing accolades, but one cannot deny his amateur credentials. Deontay Wilder is a former Olympic Bronze medalist at the 2008 Beijing Olympics, a former US National Champion, and a gold medalist in the 2007 Golden Gloves heavyweight tournament.

Well he is. They don’t give away Olympic medals for nothing.

Wilder won the Olympics trials in just 21 bouts and even has a win over 2008 Beijing Olympics gold medalist Rakhim Chakhkiev in the amateur circuit. While we may criticize his boxing skills all we want, as one fan pointed out, “they don’t give Olympic medals for nothing.”