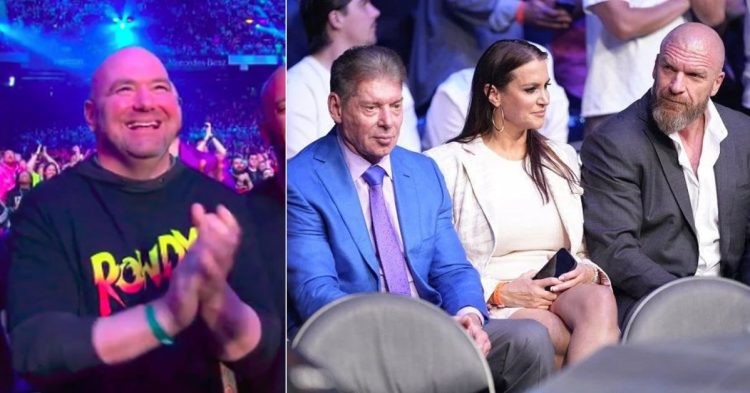 Despite not being in the same sport, WWE and UFC go head-to-head during weekends whenever they have a huge event coming up. That was the case earlier this year when WWE decided to hold the Money in the Bank premium live event in the MGM Grand Arena almost at the same time as UFC 276, which took place inside the T-Mobile Arena in Las Vegas as well.

Be that as it may, neither Vince McMahon nor Dana White has shown any disrespect for each other, keeping their relationship quite professional to say nonetheless. Recently, Vince McMahon was spotted for the first time at a UFC event after he made his way to UFC 276 following the conclusion of Money in the Bank.

Vince McMahon was present alongside Triple H and Stephanie McMahon inside T-Mobile Arena at UFC 276. Recalling the incident, Dana White shared a hilarious story about the time when he came to see a live WWE event.

In a recent interaction with the media, White revealed how mistreated he felt during his time at WrestleMania 34 when he came to see Ronda Rousey.

“They reached out to me, and said that he wanted to come to the fight.”

“I show up, it’s in New Orleans, I fly down to fu**** New Orleans. No going in the back or any of that sh**. They are the roll call window for you. I go to the fucking roll call window, and yeah ‘we don’t have tickets for you.’ I call some people, ‘Oh yeah, we found them. Okay. We got your tickets.'”

“We were in teh fu**** raftors. People were coming up to me and saying, why are you sitting in these seats. I said, ‘well that’s where they sat me, so fu** em, I am gonna sit right here.” White said.

WrestleMania 34 marked the first fight of Ronda Rousey’s WWE career as she teamed up with Kurt Angle to take on Triple H and Stephanie McMahon. Rousey emerged victorious after trapping Stephanie McMahon in an arm bar for a submission victory.

Dana White was at the event and seemed quite ecstatic at his former UFC employee and friend Ronda Rousey stealing the spotlight at WrestleMania.

“They let me know what they thought of me at that event.” White joked, “This wasn’t 25 years ago, this was like two years ago.”

White also had a piece of advice for Vince McMahon, who recently retired from his tenured position as the CEO of the company. The subtle remark was also directed towards Triple H and Stephanie McMahon.

“There are no hard feelings. I get it, Vince is like that. That’s the way he is. I sat in my fu**** seats and I watched the whole event.”

While the comments from Dana White did seem quite aggressive towards Vince McMahon, the UFC President clarified that isn’t the case, and he has nothing but respect for the former WWE boss.