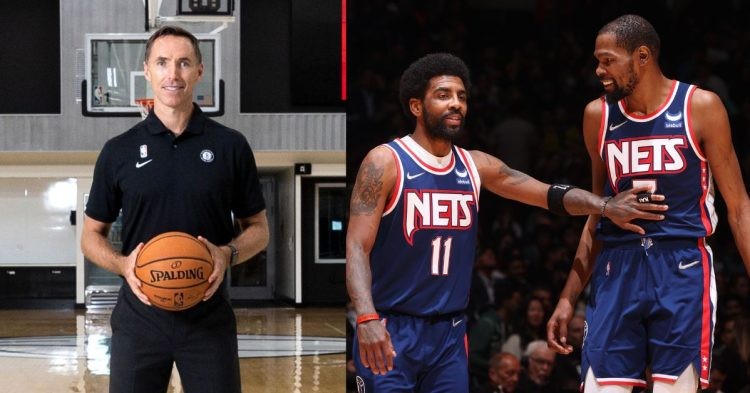 The Brooklyn Nets franchise has been in the spotlight many times in recent times. One of the main reasons for that would be their players. At one point, they boasted a deadly trio of Kevin Durant, Kyrie Irving, and James Harden. However, the big 3’s journey was cut short after Harden decided to leave the team to join the Philadelphia 76ers. It was then that Ben Simmons arrived in Brooklyn.

Amid all the expectations for the new boy on the block, there also was drama involving both KD and Kyrie. Both of them were looking to leave the team during the 2022 summer. Kyrie teased the move multiple times to the LA Lakers and a reunion with LeBron James but it was to no avail. On the other hand, Durant decided to force a move by demanding Nets owner Joe Tsai fire both Steve Nash and Sean Marks to keep him.

However, Tsai decided to publicly take sides and declare his support for the head coach, Steve Nash. It seemed like Durant’s ultimatum did not work out. He thought that the franchise would let him go or fire the ones he pointed his finger at. But in reality, none of that happened. Kyrie’s reason for wanting to leave may simply have been all the drama and bad image that he earned during his time.

However, in both of these players’ cases, the Nets organization did not budge when it came to negotiations with other NBA teams. They were clear in replacing them with solid draft picks and players that boasted world-class potential. In the past, many rumors were mentioning that the Nets players were unhappy with Nash and his coaching methods. Durant’s trade demands confirmed it.

Can Kevin Durant and Kyrie Irving lead the Brooklyn Nets to an NBA Championship next season?

Recently, former NBA champion and insider Channing Frye has let the world in on some interesting facts regarding the Nets on Road Trippin’.

He said, “When you don’t trust your coach when crunch time comes, that’s a big thing. You gotta trust the playcall that the coach calls. KD and Kyrie scores so easily they may say f**k you Steve I’ma do what I wanna do.Can they do that consistently? Can they trust Steve to make the right call to sit the bench for six minutes a game during the regular season?”

Durant spent a couple of seasons with Nash at The Bay before he chose to leave the Warriors. Reports say that he played a pivotal role in the Nets’ hiring of the American coach. Despite all that, it seems like their relationship has turned sour. According to Channing Frye, both Irving and Durant may be willing to disobey Nash’s calls if the chances come.

It is no secret that the pair of them aren’t afraid to express their opinions and that will surely be the case with the Nets’ coach. If the franchise wants to win the title with Irving, Durant, and Simmons, they would have to make sure the right strategies and tactics are aligned by the coaches for the players to do their own thing.

More importantly, the players should be willing to listen to the head coach in order for the team to succeed. As Fyre claimed, both Kyrie and Kevin Durant can put up points on the board without much assistance. Hence, it does make a lot of sense why they might be willing to do things on their own.