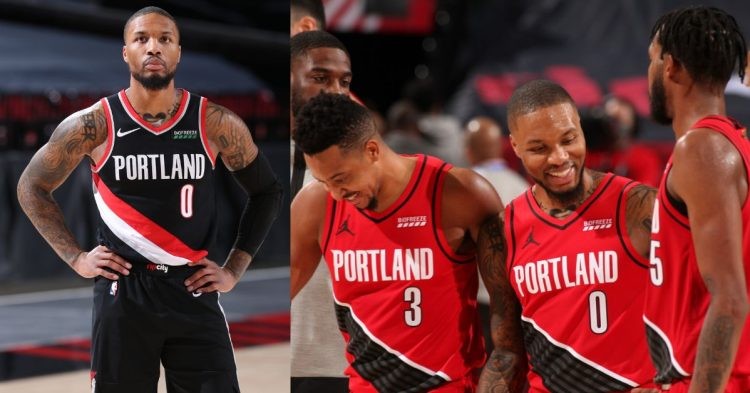 There have been many players who have only played for a single team in the NBA. Stars like Stephen Curry, Kobe Bryant and Dirk Nowitzki. Another player who might be making his way onto that list will be Damian Lillard. He currently plays for the Portland Trail Blazers.

The Trail Blazers drafted Dame at 6th overall in the 2012 NBA Draft. Since then, he has cemented his place as one of the franchise’s all-time greats, as he has been instrumental to every bit of success they have had. However, many fans and former players have always wondered why Lillard chose to stay when he could be winning title after title elsewhere. Recently, he addressed these comments and revealed his future plans.

Lillard said on the The Dave Pasch Podcast, “My intention has always been to be a Trail Blazer for life. Nothing would make my career more than just winning one championship in Portland. I’ve said this on many different occasions, they call it ‘He’s being loyal!’ and ‘Loyalty this, loyalty that’ and I’m like, I’m naturally a loyal person but I do have a level of loyalty to the organization, but this loyalty that they’re talking about is ultimately to who I am as a person.”

“I’m naturally a loyal person, but I do have a level of loyalty to the [Blazers] organization… I feel like we’ll have a chance to win, I feel like that moment is going to come.”@Dame_Lillard on whether he’ll remain in Portland for the rest of his career

“I’m being loyal to who I am and not getting beside myself because I’m somebody that, I believe what I believe. I think I can get it done. Now, everybody else might say ‘There’s no way the Blazers will ever win. They need to do this, they need to do that.’ But that’s just not how I feel about the situation. I feel like we’ll have a chance to win, I feel like that moment is going to come, I feel like that opportunity is going to come,” Dame also added.

Dame is undoubtedly one of the best players in Trail Blazers’ history. He commits to the franchise to at least win one championship with them. Although many may disagree with his decision, it does make sense for the American. When a team is so close to your heart, you will not have the mind to leave and play elsewhere. It seems like the same is the case for Dame too.

Any NBA team would take the 32-year-old in the blink of an eye and would pay him hundreds of millions. However, by committing to Portland, he proves that the Trail Blazers organization and fans are more important to him than money.

Khabib Nurmagomedov Predicts Bizarre Ending to UFC 280, Says Charles Oliveira Will Not Even Fight for the Title in Abu Dhabi