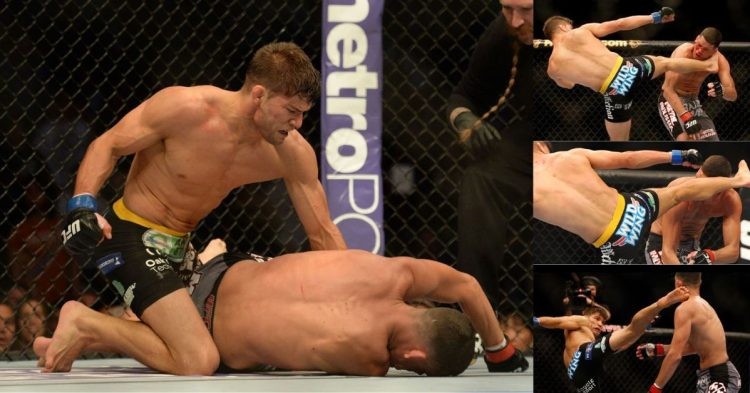 Nate Diaz is as tough as they come. The Stockton native takes on Khamzat Chimaev in a five-round headliner at UFC 279 inside T-Mobile Arena in Las Vegas. What’s the catch? While fans are talking about Diaz’s chances of beating Chimaev, the conversation has been more around whether the Dagestani fighter would be able to finish Nate Diaz.

The Stockton Slugger has earned a reputation for being incredibly tough, and it’s hard to think he has truly lost if he is not submitted or stopped in a fight. Over the years, Diaz’s toughness has made fans even forget about the fact that he has been both stopped and submitted in his professional MMA career.

Hermes França submitted Diaz via armbar back at WEC 24 in October of 2006. Meanwhile, Josh Thomson became the first fighter to hand a TKO loss to Nate Diaz back UFC on Fox: Henderson vs. Melendez in April of 2013.

People seem to forget Nate Diaz has been knocked out almost cold by Thomson, who head-kicked Diaz into another dimension that his team even had to throw in the towel.

Ahead of his fight against Khamzat Chimaev, Diaz sat down with Brett Okamoto of ESPN and shared his thoughts on the same. “I’m saying, no one’s taking me out they said lots of Josh Thomson or whatever but that’s cool. He’d been here a lot. He was in the UFC before me too at least and he was top five. And he was top five at the time and since then it’s been top top all the way.” Nate Diaz said on his loss to Josh Thomson.

Josh Thomson announced his retirement from mixed martial arts after a KO loss against Patricky Pitbull. His last fight under the UFC banner came against Tony Ferguson back in July of 2015.

Ahead of arguably the toughest challenge of his UFC career and mixed martial arts journey, Nate Diaz will stand opposite Khamzat Chimaev at UFC 279 this weekend. Do you think Chimaev stops Diaz? Or will the Stockton Slugger shock the world once again? Only time will tell.