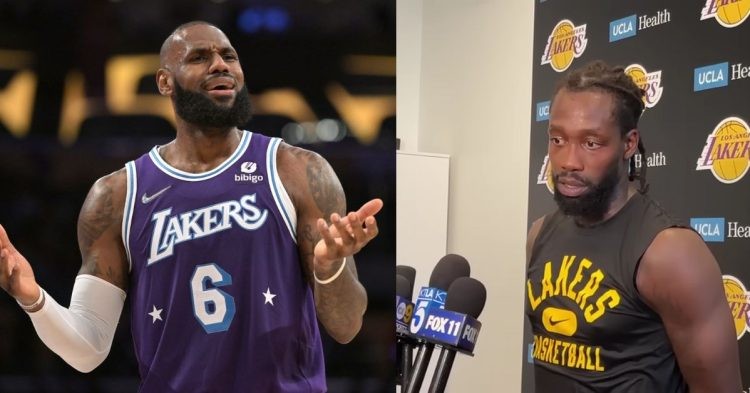 Patrick Beverley was traded from the Utah Jazz to the Los Angeles Lakers in return for Talen Horton Tucker and Stanley Johson. He will now play alongside LeBron James, Anthony Davis, and Russell Westbrook. Beverley was traded for with the hopes of bringing a title to the Lakers.

We all know how vocal Pat Bev can be at times. He is quite the irritant and tenacious personality on the court. But that has its advantages, The new Lakers guard made a controversial statement that none of the core members of the Los Angeles Lakers would like. The NBA season is yet to begin and there is already drama. One must wonder what Beverley said and how much truth there is to it.

Beverley has gone toe to toe with LeBron James and Russell Westbrook several times in his career. He made his presence felt in the league by playing scrappy defense. Therefore, he has been a part of the NBA despite a rough start and a career overseas.

He seems to have forgotten that and made the following statement in a press conference when asked how it felt to be playing with LeBron James and the Lakers.

“They’ll be playing me. I made the playoffs last year, they didn’t. That’s the difference.”

Quite a bold opening statement from Beverley. He definitely made the NBA playoffs last year alongside Anthony Edwards, Karl Anthony Towns, and the Minnesota Timberwolves. However, he has never won an NBA title or even made the Finals in his career.

LeBron and AD helped the Lakers win a title in 2020. They hope to bring another to Los Angeles before their time together is over. The Lakers are certainly happy to get Beverly. However, that does not mean they will be a significantly better team with him on the court. It is a well-known fact that LeBron James needs shooters around him for his team to flourish the most.

NBA fans will be interested to know that both the Timberwolves and Lakers got better this year. Rudy Gobert was traded to the Wolves in return for a package surrounding Patrick Beverley. Now, he has been moved and the team seems to be done with him.

Which team does better in the 2022-23 NBA season will prove how true his words are and who the winner of this trade is.