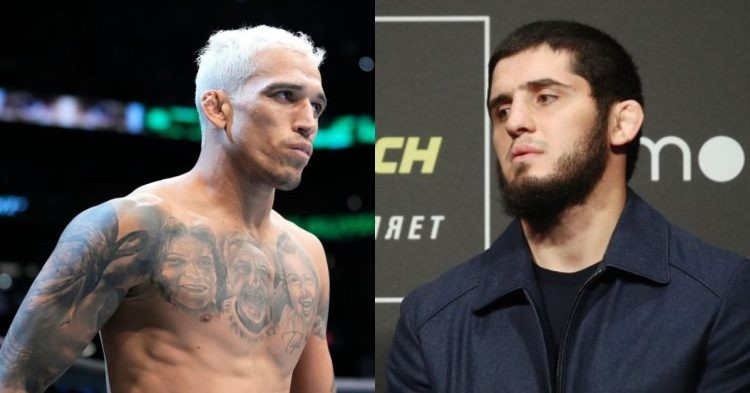 Charles Oliveira will step inside the octagon this weekend on October 22nd to take on Islam Makhachev in a five-round main event clash at UFC 280. This highly anticipated matchup will be contested for the vacant lightweight title and will take place at the Etihad Arena in Abu Dhabi, UAE.

With less than a week left for this title fight, both fighters have arrived in UAE and have started their preparations for this matchup. Makhachev along with his team came a month ago to get acclimatised to the conditions and began his training camp.

Meanwhile, Charles Oliveira arrived in Abu Dhabi a week ago with his entire team. As we inch closer to this big clash, the two lightweights crossed paths for the first time as the Russian lightweight was checking in with his team at the Abu Dhabi hotel.

Do Bronx was sitting with his teammates and coaches at the hotel. At that time, Makhachev along with his coaches and sparring partners crossed the former champion and the two fighters took a glance at each other.

Oliveira looked very calm in what could have been a potentially tense situation as UFC fighters have previously engaged in many heated altercations. There were no words exchanged and the two went on with their respective business. But things could intensify during the pre-fight press conference and face-off before the fight.

Will Islam Makhachev and his team’s pre-fight banter affect Charles Oliveira during their fight at UFC 280?

Throughout the entire build-up of the title fight, Islam Makhachev and Khabib Nurmagomedov have been downplaying Charles Oliveira’s skills and the threat he possesses. The Eagle has predicted that Makhachev will easily get past Do Bronx and will submit him at UFC 280.

In the past, fighters like Michael Chandler, Justin Gaethje and Dustin Poirier have also undermined Do Bronx ahead of their respective fights. But their mind games didn’t affect him as he went on to outclass all three contenders in a violent fashion.