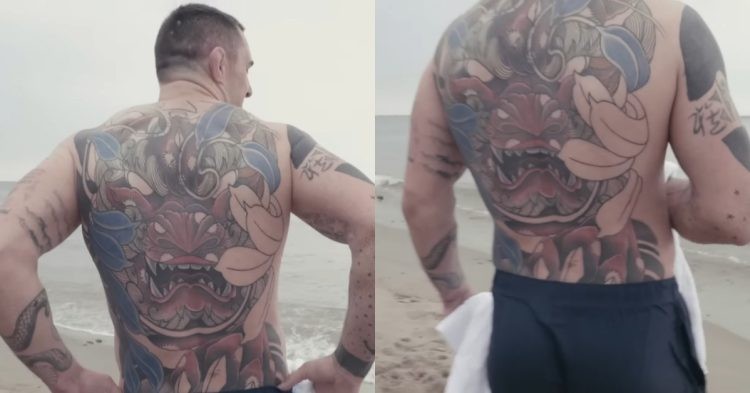 Tom Aspinall is yet to finish his back tattoo. (Images via Full Reptile YouTube Channel)

Tom Aspinall is known for his love for tattoos. Almost every time he steps inside the Octagon, there is a new tattoo on him. It is not going to be any different this time around either.

He will have a giant tattoo on his back. Although he is yet to discuss the significance behind it, it is certainly one that looks very good on him. But unlike his other ones, this tattoo is unfinished at the moment.

“I was doing like weekly sessions, I was doing like 6 hours (in a day)… started off with 3 hours and I started doing 6 and then I was like because I can get it done quick before like I get in camp in that. But then, camp started and I was just like, no. So I’m gonna have a half-finished tattoo from the fight, which is not good.”

Getting a tattoo is something that is very time-consuming. It is even more of a hassle when the tattoo is so massive in scale. Even though he wanted to get it done before the upcoming fight, it just did not finish in time. Although he had the option to get it done during the camp. But Tom did not even want to miss a minute of training. It proves how dedicated he is to the craft of fighting.

The tattoo looks like that has a monster lurking behind the bushes. It looks like the majority of the tattoo was done. But there are still some parts that are yet to be inked. Despite being unfinished, it looks spectacular. One may wonder how much better it will look once it’s done completely.

What are the other tattoos that Tom Aspinall has?

As mentioned above, Tom Aspinall also has other tattoos on his body. The most noticeable one is his chest tattoo. It has the ruins of a Roman amphitheatre with a gladiator standing by it. It is a spectacular piece of art. But only that, but he also has both of his sleeves tattoed as well.

On his right sleeve, Tom’s tattoos look like traditional Samoan tattoos. But he recently covered up all of it and got a new sleeve entirely. It is entirely black with some portions of his old tattoo in the middle.

The 29-year-old has a quote inked on the inside part of his right bicep. On his left sleeve, he has a tattoo of a sky full of birds and some Asian alphabet. It also has the words ‘full of dreams‘ inked on it.

Ahead of his last fight against Alexander Volkov, Aspinall got the tattoo of a snake that is about to strike its prey. So it is very evident, how much the UFC heavyweight fighter loves to use his body as the canvas for arts from various fields.

The Brit will fight Curtis Blaydes inside the O2 arena in London. With both fighters ranked in the Top 5, the contest may determine the next title contender.