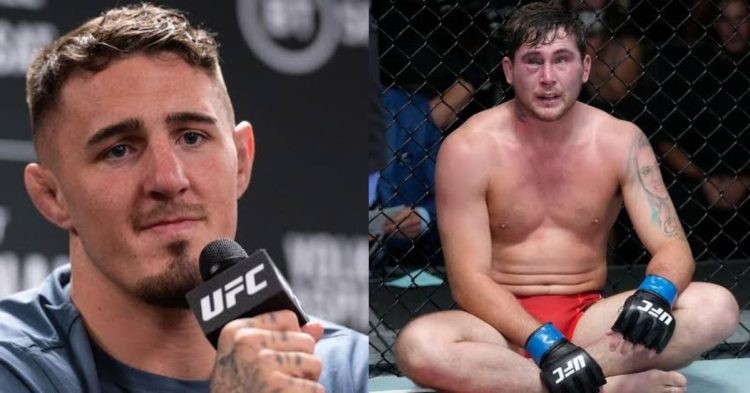 Tom Aspinall will be in action this weekend on July 23rd to square off against Curtis Blaydes in a five-round main event bout that will take place at the O2 Arena in London, United Kingdom.

This matchup will be the British heavyweight’s second straight headliner and ahead of this big fight, he gave an interview to Submission Radio. Aspinall previewed his upcoming fight and also shared his thoughts on teammate Darren Till missing out on his scheduled UFC London fight against Jack Hermansson due to an injury in one of the segments of the interview.

In this clip, Tom requests fans to stick with Till during his bad times and also claimed that things will become much better in the future for the British middleweight fighter.

“I just feel bad for him. Like it’s difficult when you’re not doing what you love. But everything will happen in good time I’m sure. Whatever’s supposed to happen is gonna happen. So keep up the face for Darren Till, I’m sure he’s gonna come back.”

It is needless to say that Darren Till is going through a torrid time in the UFC with several injuries and losses in his past few fights. However, every fight enthusiast is aware of Till’s potential and it would be unreasonable to count the British middleweight out in his future fights.

With Darren Till injured and no longer being able to compete in the UFC London card, Tom Aspinall was asked by one of the interviewers of Submission Radio, whether the British middleweight will be in his corner for his main event matchup against Curtis Blaydes.

Aspinall said that Till will most likely not be in his corner but didn’t rule out his absence completely due to his unpredictability. “No, I don’t think so, I don’t think so this time. But you never know with Darren Till he might just pop up and turns out in my corner without even asking who knows.”

The British middleweight was present in Tom’s corner for his last fight against Alexander Volkov. Till celebrated with Aspinall by jumping at the top of the cage after his teammate picked up a brilliant first-round submission win.

Therefore Darren Till’s fans will be a bit disappointed after hearing the news of his absence in Aspinall’s corner at UFC London.