Tom Aspinall’s UFC Fight Purse: How Much Money Has Tom Aspinall Earned in His UFC Career? 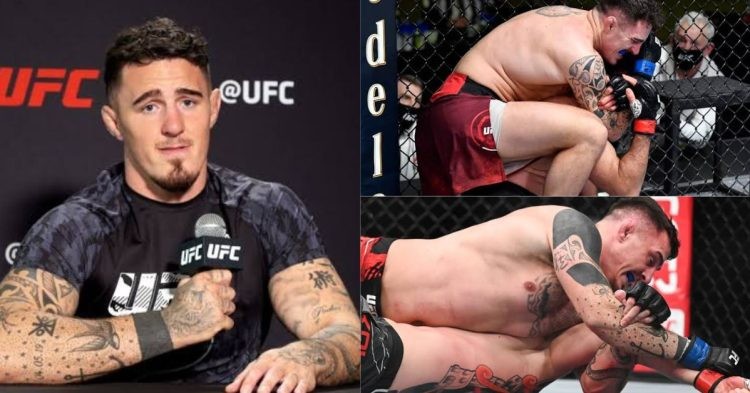 Tom Aspinall will return to action this weekend in his home country as UFC is back in England. He takes on Alexander Volkov in the main event this Saturday. The Russian is currently ranked at no. 6 in the heavyweight division.

Hence, a victory over Volkov will propel the no. 11 ranked Tom Aspinall on a good position in the division. This weekend’s event will also be the first time that the Brit is having the chance to headline a UFC card.

There were doubts recently about the headlining fight taking place due to the current geopolitical climate of the world. In the UFC 272 press conference, UFC president Dana White was asked about Volkov’s availability for the fight. He said the UFC will be prepared for all the possible outcomes.

Tom Aspinall made his UFC debut in the middle of a worldwide pandemic on 26th July in 2020 against Jake Collier. Tom Aspinall made a reported $73,500 for his first fight in the organization. However, the figures are never 100% accurate as UFC does not disclose the fighter pay.

Following the debut victory, he only made a reported $27,500 for his second fight. Tom took on Alan Baudot just 3 months later. His pay consisted of 12,000 USD to show up and then the same amount as the win bonus. Aspinall also made $3,500 as fight week incentives.

The 28-year old took a massive step up in competition in his third UFC fighter. He fought Andrei Arlovski and defeated him via rear-naked choke. For the contest, Tom made $60,00 to show up and win. He then banked $50,000 as the performance of the night bonus and $3,500 as fight week incentives. In total, his purse was a reported $113,500.

In the biggest fight of his career, Tom Aspinall took on Alexander Volkov in the main event of UFC London. Aspinall secured a dominant first-round win against Volkov and gave the British fans a main event to remember for the ages. For his impressive win, Aspinall earned a fight purse of $124,000 including a $50,000 performance of the night bonus.

Tom Aspinall takes on one of the toughest matchups in heavyweight division, Curtis Blaydes in his next fight at UFC London.