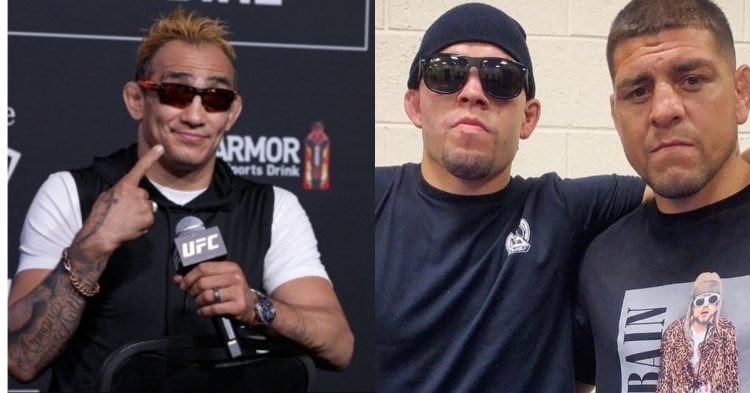 Tony Ferguson stepped inside the octagon to take on Nate Diaz in the main event of the recently concluded UFC 279 PPV. Both El Cucuy and The Stockton Native put on a great show for the fans present inside the T-Mobile Arena in what was a wild war that lasted for four rounds.

However, it was Diaz who got the last laugh in this epic fight as he choked out Tony Ferguson via guillotine and won the matchup. Following this loss, the former interim lightweight champion suffered his fifth consecutive defeat and subsequently, fight fans on social media were pleading for him to retire from the UFC.

Thereafter Tony Ferguson sat down at the UFC 279 post-fight press conference and addressed the comments made by fans and experts on social media and confirmed that he will continue fighting in the UFC. “Like I said Cucuy is a legend. I’m not going f*****g nowhere.”

While speaking at the press conference, El Cucuy also revealed that he received an invitation from Nate Diaz and his team to come together and train after their fight at UFC 279.

“I got the invite to their camp. So I’m going to be real which is super cool. I got my own camp which is awesome. But I’m not going to say no to them. Those guys are pretty f*****g cool. I mean we run California you know what I mean. We really do a lot for this sport so as much as we would want to fight, we have to make things right.”

What’s next for Tony Ferguson after his loss to Nate Diaz at UFC 279?

As mentioned earlier, Tony Ferguson has failed to win a single fight in his last five outings and it is needless to say that he is going through a torrid time in the UFC. The former interim lightweight champion is running out of options as there would be very few top contenders in the lightweight as well as welterweight division who would be willing to fight him.

With that being said, if El Cucuy plans to return to the lightweight division then a matchup against Dan Hooker would be great to watch and it makes sense given they are ranked #11 and #14 in the division. From the press conference, it seemed as if Tony Ferguson enjoyed fighting at welterweight.

A matchup against Stephen Thompson would be perfect as both like to stand and strike. Similarly, Wonderboy is also going through a rough patch with successive defeats and this fight would be exciting to watch for fight fans all around the globe.

Do let us know in the comments section who you think should Tony Ferguson fight next in the UFC?