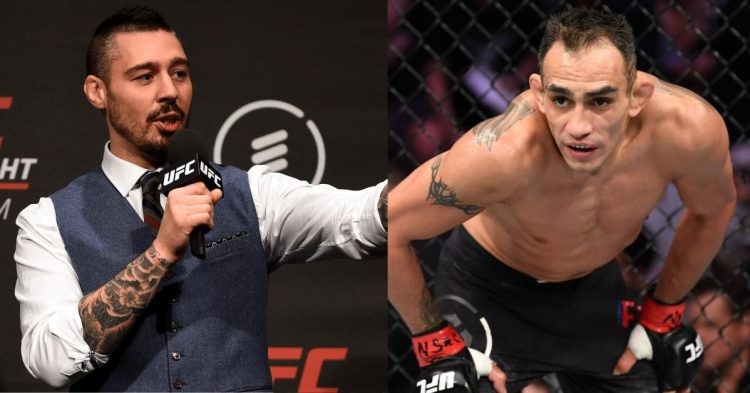 Tony Ferguson will make his return inside the octagon this weekend as he goes against Li Jingliang in the co-main event of UFC 279. This highly anticipated matchup will take place at the T-Mobile Arena in Las Vegas.

Going into this fight, El Cucuy is on the back of a brutal knockout loss to Michael Chandler at UFC 274. Following this crushing defeat, Tony Ferguson has unexpectedly moved up a weight class and will now compete in the welterweight division.

The former interim lightweight champion has now set his eyes on a new goal and that is to win the 170-pound gold and subsequently, he is aiming to make a big statement against a tough opponent like Li Jingliang.

However, several fans and experts are unhappy with Ferguson’s decision to face The Leech as they wanted him to fight Conor McGregor. Dan Hardy is amongst those people who feel that El Cucuy fighting Jingliang won’t help him rise through the welterweight ranks quickly.

While having a conversation with Submission Radio podcast hosts, Hardy shared his thoughts on the matchup and expressed his views on Tony’s move to welterweight.

“I think this is an odd fight for him though because I don’t think there’s a great deal to gain for it. I mean we saw the leech like the last thing that you remember from the leech is not the Muslim Salikhov fight. It’s him getting run through by Chimaev and you know for sure that Tony Ferguson is not going to do that to him.”

Tony Ferguson is currently going through the worst form of his MMA career. The former interim champion has suffered four losses on the trot and has dropped down to #12 in the lightweight division. Consequently, he has moved up to welterweight and is facing Li Jingliang.

It is needless to say that El Cucuy’s move was surprising as no one was expecting him to fight in the welterweight division. However, Dan Hardy believes that Tony Ferguson’s decision to move up a weight class has come a little too late.

He reckons that Ferguson should have moved up a few years ago before turning forty years old as that would help him avoid cutting excess weight and perform much better. Ferguson indeed needs to make a big statement at UFC 279 in order to make a big leap in the welterweight rankings as there are several fighters in line for a title shot.

Do let us know in the comments section if Ferguson should have left the lightweight division way sooner and attempted for the welterweight title.