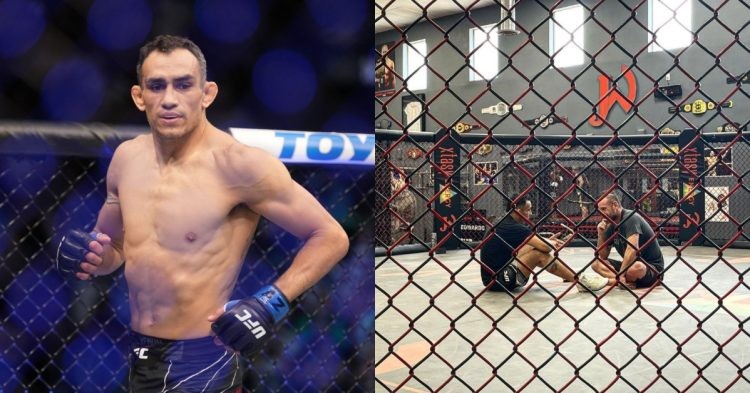 It looks like Tony Ferguson’s long search for a fight camp has finally come to an end! After spending years without a proper gym, he has finally joined Jackson Wink MMA Academy. He confirmed the news by posting a photo of him with the gym’s striking coach Brandon Gibson.

The gym has produced multiple UFC world champions over the years like Holly Holm, Andrei Arlovski and Jon Jones. The partnership between Greg Jackson and Mike Winkeljohn has built a powerhouse gym which is a perfect nurturing ground for talents of all ages. So the inclusion of Tony Ferguson only adds to the elite list of fighters who have graced the gym with their presence.

But at this moment in his career, it is Tony who perhaps needed the partnership more. Ever since losing to Justin Gaethje, Ferguson’s career has taken an astonishing fall. He then proceeded to lose against Charles Oliveira, Beneil Dariush and Michael Chandler. The last loss against Chandler was perhaps the worst of his career. Hence, Tony needs some fresh ideas around him.

The current no.1 lightweight contender Charles Oliveira had an interesting proposition for Tony. ‘Do Bronx’ asked Tony to move to Brazil and join his camp. But El Cucuy humbly turned down the offer as he was not ready to leave the country.

However, it seems like Tony Ferguson is now ready to join the New Mexico-based gym. At the moment, there is no news of Tony coming back any time soon.

Tony Ferguson is a man of his own ideas. Although he has had big-name coaches in his corner, he has never joined a reputed gym. He trains with Freddie Roach for boxing and had Eddie Bravo as his Jiu-Jitsu coach. Hence, Ferguson has always had the backing of great coaches. But he has always trained independently instead of joining a gym.

He created a gym in his backyard where he prepared himself for his fights. Hence, this is the first time that he will have a structured fight camp and the fans can not wait to see Tony join the Jackson-Wink MMA gym. One fan was happy to see Tony trying to turn his career around after 4 consecutive losses.

“Tony seems to be doing really well lately. Love to see it. Get em Champ”

One fan was just happy to see him in Albuquerque.

What do you think of Tony’s move to Jackson Wink MMA Academy? Do you think he made the right move by joining the gym? Or do you think his career is beyond redemption at this point? Let us know in the comments down below.