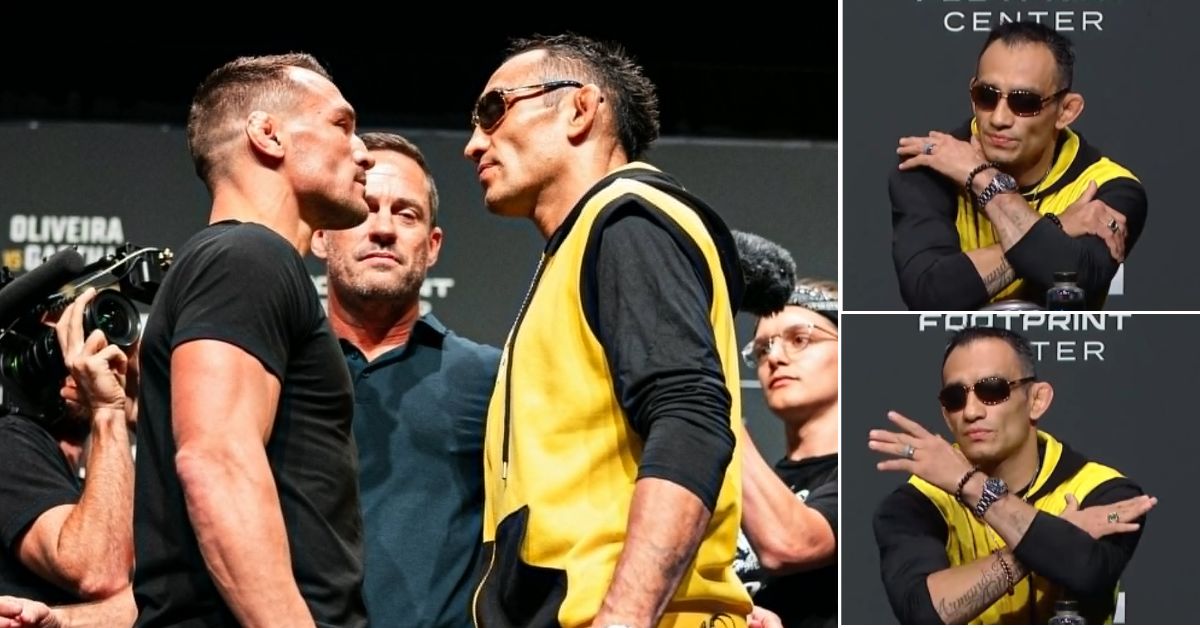 Phoenix, Arizona was behind Tony Ferguson all the way through, during the pre-fight press conference ahead of UFC 274 this weekend. El Cucuy returned to the UFC stage after almost a year. He takes on Michael Chandler on the main card of UFC 274 in what promises to be an explosive match-up between two of the most entertaining fighters in the UFC right now.

The former interim lightweight champion was greeted with loud cheers as he made his way to the stage, and throughout the 30 minutes of the pre-fight press conference, fans just couldn’t keep calm.

There were several exciting moments, however, the one that got the most attention from fans was a gesture from El Cucuy, who subtly revealed his plans ahead of the showdown against Michael Chandler this weekend.

Tony Ferguson has stated that he is going back to his wrestling roots in preparation for the Michael Chandler fight. While there’s no denying his wrestling credentials, Ferguson has evolved as a submission specialist more than a grappler through the course of his illustrious mixed martial arts career.

So it wasn’t very surprising to see Ferguson give a submission scare to the former title challenger during the pre-fight press conference. Check out the segment where Ferguson gestures a rear-naked choke, suggesting a stoppage win over Michael Chandler come UFC 274.

Tony Ferguson picturing the rear naked choke and even adjusted his grip around the cinco de Mayo reference 🤣 https://t.co/cK1Tahgaij

If that was not enough, Tony Ferguson took it a step further, with the same tactics during the face-off. The first gesture must have gone unnoticed by Michael Chandler. However, the latter was received sportingly by the former title challenger.

It seems like the game plan from Tony Ferguson is quite clear, while it may be a distraction, this time it does look like El Cucuy will take the fight to the ground. Chandler is a power-puncher and poses the same threat as Justin Gaethje. Be that as it may, we can’t rule out the unpredictive nature of Tony Ferguson. Rest assured, it’s going to be an entertaining fight nonetheless.