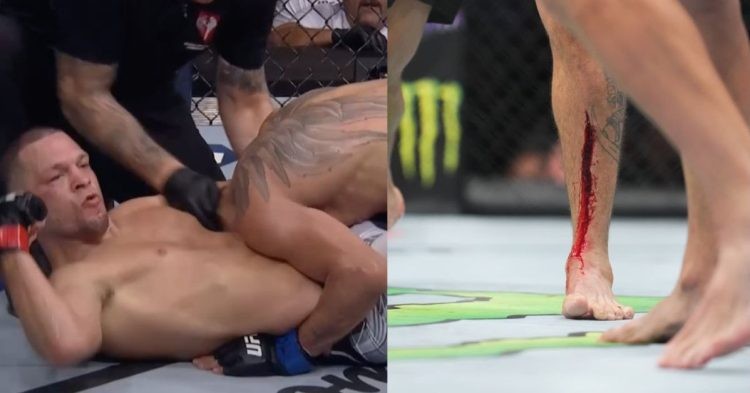 In what many thought would be his final fight with the organisation, rising welterweight contender Khamzat Chimaev was scheduled to face Nate Diaz at the event, which was going to take place at the T-Mobile Arena in Las Vegas, Nevada. Instead, Chimaev was 7.5 pounds underweight, which caused a series of events of epic proportions.

The new main event, Nate Diaz vs. Khamzat Chimaev, is sitting atop the rearranged card. Ferguson has suffered four straight defeats dating back to UFC 238 in June 2019, while Diaz has suffered two consecutive losses and is winless since UFC 241 two months later.

During the bout, it was competitive while it lasted. Both fighters are known for their durability. This is evident in their bout when in the first round itself, Tony’s leg started to bleed. This was unusual to see in the sport. The cause for that, as of now, is still unknown. However, Joe Rogan speculated that it was caused by the leg kicked being checked by Diaz.

Whether it had an impact on the fight is something only Tony could reasonably answer.  However, Tony has been in many fights where he suffered such injuries and he came through it. Not to mention, from the get-go Diaz looked faster and was more aggressive. Most likely, the outcome of the fight wouldn’t have changed had the leg been damaged.

Nate, in his own right, was suffering from many calf kicks. Bruises visible on his calf proved how damaging they were. Yet, he continued fighting, maintaining his legacy of possessing a true fighting spirit.

Nate Diaz defeats Tony Ferguson in the 4th round via submission

In the main event at the top of a loaded card, Diaz makes an incredible final stand against Tony Ferguson. Ferguson, a former interim lightweight UFC champion, performed admirably as the duo entertained the crowd.

The highlight of the opening round was a leg kick. Both fighters made an effort to demonstrate some of their boxing, but Diaz’s cut on Ferguson’s shin after Ferguson checked a leg kick was the most significant development.

The third round was when things really started to pick up. Ferguson also had his share of successful kicks, and Diaz had some success with his boxing combinations. Both boxers displayed some theatrical behaviour, with El Cucuy lying down in the cage’s centre

As Diaz locked in the guillotine to put an end to the night, winning the bout in the 4th round. Giving the fans an entertaining fight and exhausting his UFC contract. What he does next, will be interesting to see.