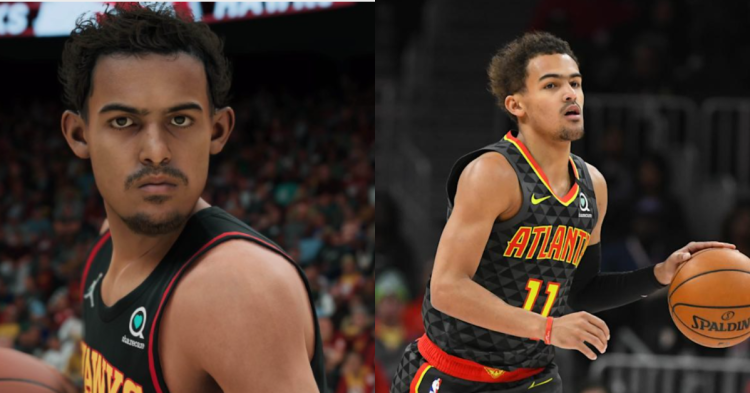 Trae Young is currently one of the most talented players in the NBA. The 2021-2022 season was quite successful for Trae. He ended the regular season being the points and assists leader, becoming the second player to ever do so.

The six-foot-one point guard is considered to be the star player of the Hawks. He consistently carried the team in points and assists. He dropped 40-point games on multiple occasions and even recorded a career-high of 56 points in a game against Portland Trail Blazers.

However, the NBA 2K creators have decided to give Trae a 90 OVR in the highly anticipated NBA 2K23. Trae justifiably received a rating, which is in accordance to the performances he delivered this season.

We would get into specifics as to why NBA 2K’s developers gave Trae a perfect rating and how he ranks in comparison to the players with equal, if not, higher ratings. The NBA 2K creators are known to make outrageous decisions when it comes to a particular player’s ratings every year, so the case of Trae Young and Chris Paul does  seem unusual.

The argument between Trae and Chris Paul is extremely tenacious, as both the point guards were instrumental for their team’s success. Young’s performances in the regular season were phenomenal but his performance in the playoffs series was the complete opposite. He recorded a playoff career-low and many turnovers in the series against the Heat in the first round. Eventually, it led to their defeat in 5 games.

On the other hand, Chris Paul was also substantial in the 2021-2022 season. He helped the team set the Suns’ franchise record for victories in a single season. Contrary to Trae, CP3 enjoyed some playoff success. He averaged 17.5 points, 8 assists and 4 rebounds until they lost to Dallas Mavericks in 7 games.

It is conspicuous that the NBA 2K creators have analyzed the performances of both the players and their respective season. Trae averaged 28.5 points, 3.7 rebounds and 9.7 assists in the regular season. Whereas, Paul averaged 14.7 points, 10.8 assists, 4.4 assists and 2 steals. Henceforth, it is possible to claim that the 2k creators have done a good job in giving Trae and Paul a decent rating.