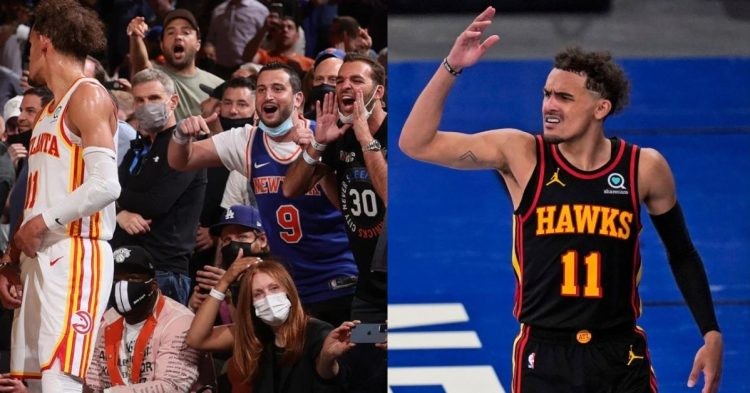 We currently have many young world-class talents in the NBA and Trae Young is surely one of them. Initially, the Dallas Mavericks drafted him as the 5th overall pick in the 2018 NBA Draft. The Atlanta Hawks then acquired him. Since then, Young has established himself as one of the best young players in the league.

Trae has played 301 games so far in his NBA career. He has averaged 25.3 points, 9.1 assists, and 3.8 rebounds in 301 games in the regular season and playoffs. Along with Luka Doncic, he is one of the players who has a bright future ahead, given the fact that he keeps up the level of his performances.

Despite being just 24, Trae seems to have angered many NBA fans. He is one of the most hated NBA players as of now. That is quite surprising because that he hasn’t played in the league for that long.

Why do people hate Trae Young?

There is no doubt about Trae’s talent and abilities, but it seems like many NBA fans hate the player. Not many know the real reason but it is quite bizarre. Trae’s villain story originated when he angered the New York Knicks fans in June 2021. He bowed in front of the entire arena at Madison Square Garden after knocking the Knicks out of the playoffs.

Both the Hawks and Knicks faced each other in Round 1 of the playoffs last year. Game 1 narrowly went to the Hawks as they took the win by just two points. However, Knicks won the next game with a score of 101-92, sending a statement across to their opponents saying they were still in the tie. That was the only game they won in the series, unfortunately. The Hawks took their business seriously and bounced back to win Games 4 and 5.

Ultimately, the Atlanta-based team won the series 4-1, to knock the Knicks out of the playoffs. This was when Trae caught the attention of the whole NBA world. He bowed in front of the fans while standing on the Knicks’ logo. He topped off his remarkable performances during the series with an interesting gesture.

Many might wonder what prompted Young to do this. However, the reason might be the fact that Knicks fans chanted “Fu*k Trae Young” repeatedly during Game 1.

Young even responded in the best way possible by hushing the fans after hitting the game-winner. He made 32 points, 10 assists, and 7 rebounds that night. It seems like that was the start of his masterclass performances against the Knicks.

Do New York Knicks fans have an aversion toward Trae Young simply because he’s too good?

We all have known for a while now that Knicks fans have an aversion toward Young. Although many might claim it is simply because he was too good for their team to stop and he knocked them out of the playoffs. However, it may have started when he bowed down in front of their fans, at their home arena. That seemed to have been the line for the Knicks fanbase.

If his gesture at the MSG wasn’t enough, Trae returned as a nightmare for the Knicks once again. In March 2022, Trae continued his villain story against the New York-based franchise. The Knicks hosted the Hawks at the MSG once again and Young used this opportunity to show that he still had the old events on his mind. The 24-year-old made 45 points, 8 assists, and 1 rebound. To top it all off, he made another gesture towards the fans.

The player also addressed the boos he received that night. He told TNT, “Nah, I couldn’t really hear them, for real,” he told TNT on the court after the win. It wasn’t even that loud, to be honest with you.” It seems like the hate story between the Knicks fanbase and Trae is still ongoing. His comments might suggest a jibe by mentioning the atmosphere wasn’t that loud.

The rivalry seems to be a motivating factor for Trae, as he always seems to show up for the games against the Knicks. The next time the Hawks will be playing against the NY franchise will be on the 3rd of November, and fans will be excited to see how it plays out for Trae and Knicks fans.