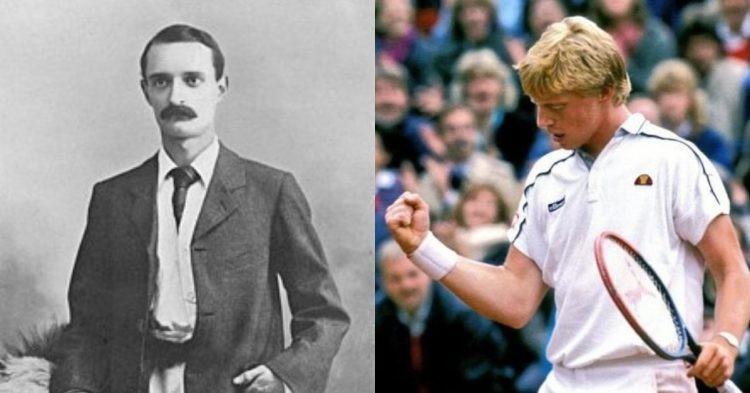 If you are a tennis fan, you probably know there is nothing more prestigious than winning a Wimbledon in tennis. The aura of the tournament is certainly above the other three grand slams. It is one of the oldest tournaments with peculiar traditions like the white dress code.

Many male tennis players have won Wimbledon with Rodger Federer holding the record (8 times). However, who is the youngest male player to ever win Wimbledon? At present, tennis legend Boris Becker holds the record but Wilfred Baddeley held the record for 94 years before Becker’s win.

Wilfred Baddeley – The grass-court king before the Open Era

Wilfred Baddeley comes from that era of tennis when the four grand slams were not the big tournaments we see them today. He became a professional tennis player in 1887 and retired in the year 1903. During this time, he won three singles titles and four doubles titles at Wimbledon.

He won his first-ever Wimbledon in the year 1891. He played the final against Joshua Pim and won the match 6–4, 1–6, 7–5, 6–0. Baddeley was only 19 years and five months old when he won his first Wimbledon. He was the youngest ever to win the title and the record stood for 94 years before being broken by another legend.

Coming from Germany, Boris Becker stamped his arrival in tennis by winning the Wimbledon in 1985 at the age of 17 years 228 days. During his career, he managed to reach the number one ranking and even won an Olympic gold medal in doubles.

Becker’s Wimbledon win in 1985 was unprecedented and no one expected him to win the tournament that year. He was ranked 20 at that time and was unseeded going into the tournament. Becker proved he was not a one-time wonder by successfully defending his title in 1986 by beating Evan Lendl.