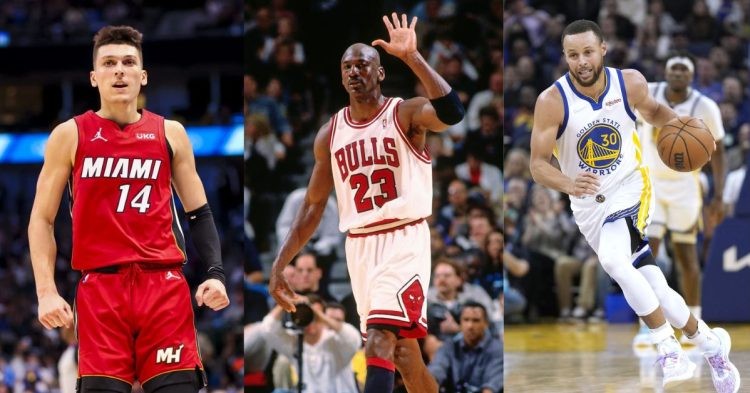 Tyler Herro is an NBA star with the Miami Heat. He has been a part of its deep runs into the playoffs in the past few years and is an upcoming talent in the league.  Herro revealed who his top 5 favorite NBA players of all time are when being interviewed by famous Youtuber Jake Paul.

The lists people have regarding all-time NBA players seem to be endless. It is important to distinguish between a top 5 favorite players list and a Top 5 all-time list. Nonetheless, Herro ended up excluding NBA legends Michael Jordan and Stephen Curry from his list.

Herro is free to have his own opinion. However, we must wonder which 5 players he personally prefers over Steph and MJ.

We all love certain NBA players because of a unique trait they display. For his own reasons, Tyler Herro chose quite a unique list of NBA legends when asked who his top 5 all-time favorite players were.

The players he selected in order were; Kobe Bryant, LeBron James, Allen Iverson, Shaquille O’Neal, and Dwayne Wade. There are several things interesting about this list. Primarily that more than half the players on it played for the Miami Heat at some point in their careers. Moreover, they won either one or multiple titles in their time with the Heat.

If it is not clear who those players are, LeBron, Shaq, and Wade all won NBA titles with the Miami Heat. Coming to the remaining 2 players on Herro’s list, Kobe Bryant and Allen Iverson are two “trademark style” players. The iconic crossover and patented fadeaway shot that these NBA legends excelled at deserves recognition.

There is no argument that Michael Jordan is considered a greater player than Kobe Bryant or LeBron James. Additionally, a good argument could be made that Steph is a better player than Dwade. Thus, if Herro were not revealing a biased personal list, MJ and Curry would have definitely had a spot in it.

Definitely might be a strong word when it comes to lists of this nature. While we can argue all day that they are better players, it is Herro’s personal preference at the end of the day.