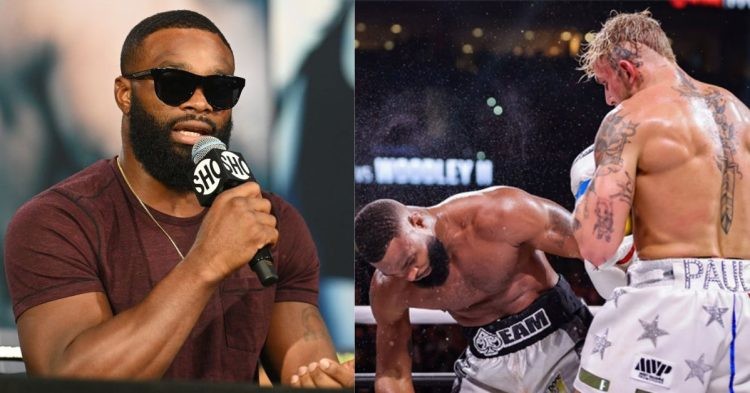 Tyron Woodley’s last boxing fight didn’t go as per his plans as he suffered a brutal knockout loss to Jake Paul in the rematch that took place last year. One year after his big showdown, Tyron Woodley revealed the difficulties he faced while preparing for the rematch against Jake.

Just before accepting the Problem Child’s offer to fight on short notice, Woodley received a big opportunity of working in the fifth season of the popular Netflix show Cobra Kai. The former UFC champion accepted the offer straightaway as he was a big fan of the show and started filming the scenes.

However, after he chose to jump on board and accept Jake’s rematch offer on two weeks’ short notice, Woodley had to manage both his training as well as his commitment to filming the Netflix show.

The 40-year-old fighter explained his tough training regime and how difficult it was to cramp in training sessions between the shoots.

“I had two weeks to get ready and I was filming 14-hour days. When I wrap up on set of Cobra Kai, I was training at 3:00 in the morning for the Jake Paul fight. Then get up, film all day again and then they let my coach come on set so we could train in between if I didn’t have a scene.”

Despite having a hectic schedule, the former UFC champion managed to fulfill all his commitments of promoting the rematch by attending the press conferences and pre-fight faceoffs. In the end, the burden of handling a lot of things played a pivotal role in the result of the fight as he failed to avenge his loss against Jake.

Will Tyron Woodley make a return to boxing?

After losing to Jake Paul, Tyron Woodley has not made a return to the boxing ring. However, the former UFC welterweight champion has been very active on social media recently and has called out British YouTuber KSI for a fight.

Woodley was even ready to accept a fight against JJ on short notice after his last opponent backed out due to a medical issue. However, The Nightmare rejected T-Wood’s offer and fought two other opponents on the same night.

Thereafter Tyron and KSI have both traded verbal barbs at each other on social media. As of now, there is no confirmation whether they will fight or not. But one cannot rule out this matchup as both KSI and Tyron Woodley are interested to fight each other.