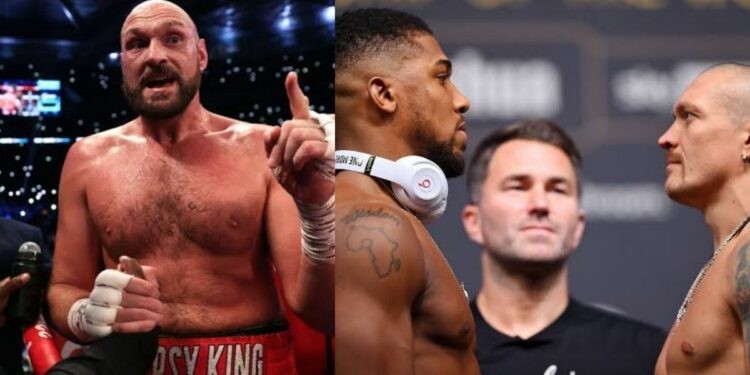 Tyson Fury had vowed to retire from professional boxing after brutally knocking out Dillian Whyte to defend his heavyweight title last month. At that time, when questioned about The Gypsy King’s decision, his promoter Bob Arum requested the interviewer to acknowledge his decision.

However, Oleksandr Usyk who is the current unified heavyweight champion and several others believe that Fury will return to fight one last time. To clear this rumour, in a recent video of FightHype, the interviewer asked Tyson’s promoter Arum whether the British heavyweight is retiring or not.

“I think Fury is going to wait to see how the Joshua fight comes out with Usyk and then he’ll make a determination whether he wants to continue. Because other than fighting the winner of Joshua and Usyk, there’s really nothing there that’s really of interest to Tyson Fury. So we’ll have to see.”

What Tyson’s promoter Bob Arum said is quite accurate as the Gypsy King has almost wiped out the best heavyweight contenders and there is nothing else to prove. However, he has been linked with both Usyk and Joshua for a fight since a long time. Hence it would be interesting to see if Tyson Fury chooses to come back and finish his career on a high note by becoming the undisputed heavyweight champion.

What’s next for Tyson Fury if he chooses to stay retired?

Unified heavyweight champion Oleksandr Usyk will defend his titles against Anthony Joshua in a rematch in July. It is needless to say that Tyson Fury who is the current WBC heavyweight champion would look closely at this fight because he might return to face the winner.

However, if he is not impressed by these two heavyweights then he could choose to stay retired. So what’s next for The Gypsy King in this scenario. As per his recent announcement after his stoppage victory over Dillian Whyte in April, Fury confirmed that he will fight Francis Ngannou in a mixed rules match next year.

It is a very unique concept and it would be fascinating to see these two knockout machines go against each other in a special fight. Do let us know in the comments section your thoughts regarding this matchup between WBC heavyweight champion Tyson Fury and UFC heavyweight champion Francis Ngannou.