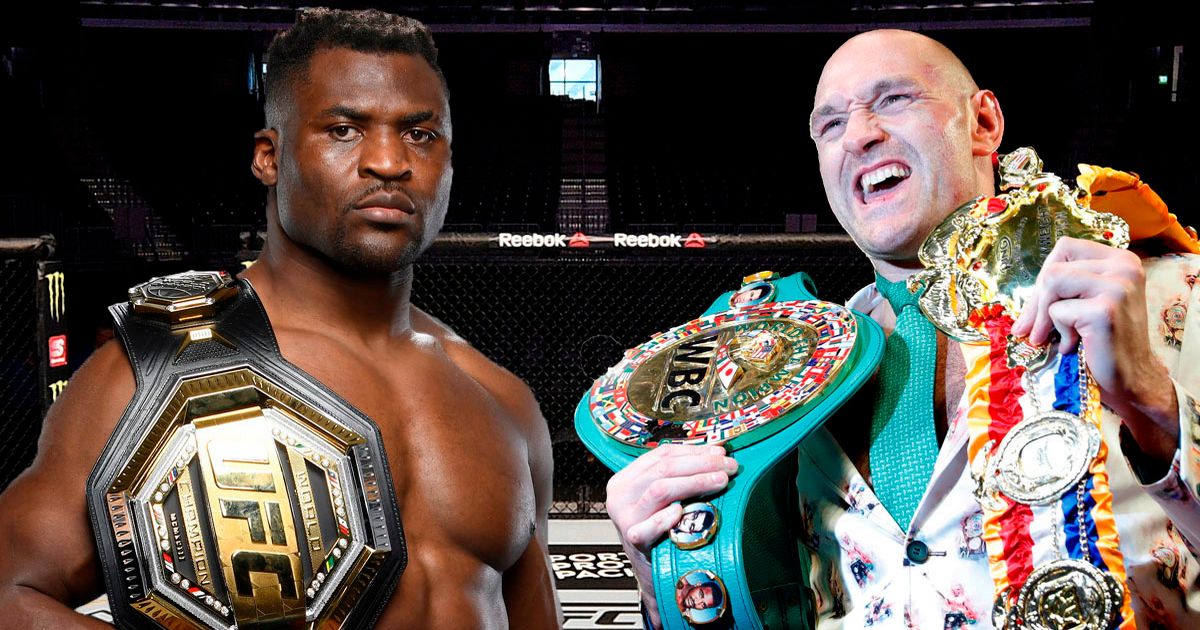 Tyson Fury complimented Francis Ngannou on his victory over Cyril Gane before challenging him to a fight in the ring.

In the build-up to Ngannou’s maiden heavyweight championship defence at UFC 270 the previous night, Fury and Ngannou constantly called one another out.

And, after the Cameroonian champion effectively maintained his title with a wrestling-heavy fight, Fury was sure to remind his opponent of their confrontations.

Ngannou had always wished to switch to boxing, hoping to become a heavyweight world champion when he left his country Europe.

However, in Paris, he turned to mixed martial arts and proceeded to be one of the most lethal fighters in the UFC.

Despite damaging ligaments in his knee just three weeks before the fight, he faced his old teammate Gane.

But, instead of his spectacular striking abilities, he used a rarely seen grappling game to win by majority verdict.

Ngannou, who is embroiled in a contract dispute with UFC president Dana White, subsequently confirmed his intention to move from the cage to the ring.

He said, “As I always say, boxing is always in the back of my pocket. It’s something that I must do before the end of my career. And right now, I’m really looking towards any opportunity to get that because it’s not like I had a lifetime here, so I better start thinking about it.”

Are We Going To See A Tyson Fury vs. Francis Ngannou Soon?

Half of Ngannou’s problem with his UFC contract is his low pay in comparison to Fury.

Yesterday night, the UFC champ received a payout of $600,000, which is very less than the $30 million that Fury is thought to have received for his triple showdown versus Deontay Wilder.

Ngannou’s agreement will be renewed by one year or three fights if he safely defends his belt.

It is quite evident that Fury is hitting Ngannou on the very same topic of unequal payouts. It would be incredible to see both of them fight and if Ngannou’s purse increases after this match, it would be the cherry on top. It might also pave the way for more Fury vs. Ngannou fights.

In a recent conversation with former UFC middleweight titleholder Michael Bisping,  Ngannou expressed his desire even more emphatically. In the discussion, Bisping spoke about Ngannou’s experiences with boxers such as Tyson Fury, Deontay Wilder, and Anthony Joshua and his interest in fighting them. To which he said, “Very much (interested). And that will happen.”

He further stated that, “In the past two years, Tyson Fury and I have been going back and forth. On social media, we have been having some pics, some tweets. He seems like he’s ready for that [a fight against Francis Ngannou].”

The title winner now having knee surgery, which would keep him out of the UFC cage for many months.

Any battle with Fury, nevertheless, would almost certainly have to wait till the Brit has maintained his world title over Dillian Whyte and then contended for the absolute crown.

Fury, however, may cut a trade, with Oleksandr Usyk to meet his fellow champion soon and then relinquish his titles to face Ngannou. Therefore, a Fury vs. Ngannou match might be a little far but is not completely impossible.