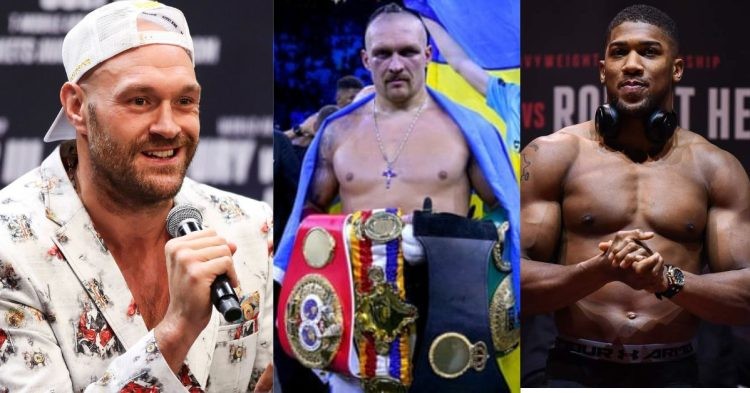 Unified heavyweight champion Oleksandr Usyk successfully defended his titles as he defeated Anthony Joshua in what was a closely contested battle that went to the distance. Following his big win, the Ukrainian heavyweight called out Tyson Fury for a fight next.

Soon after the winner of the rematch was announced, The Gypsy King took to social media and shared his thoughts on the title fight. It appeared that Fury was highly unimpressed with the performances of both the heavyweights as he trashed them on his Twitter page.

“To be honest guys after watching that both of them were shit. It was one of the worst heavyweight title fights I have ever seen. It was bulls**t.”

Later in the video, Tyson Fury declared that he is coming out of retirement and also made a bold claim that he would fight both AJ and Usyk.

“I’d annihilate both of them on the same night. F*****g shite. Get your f*****g check-book out cause The Gypsy King is here to stay forever.”

With both Oleksandr Usyk and Tyson Fury interested to fight each other, we could soon see these two heavyweight stalwarts collide against each other inside the ring to gain the bragging rights for the undisputed heavyweight champion of the world.

How will Tyson Fury fare against Oleksandr Usyk?

Both Tyson Fury and Oleksandr Usyk are undefeated in their professional boxing careers and that’s what makes the undisputed heavyweight title fight more exciting. Speaking about which, just like Joshua, The Gypsy King will have a massive height and reach advantage over Usyk.

Moreover, Fury’s impeccable defense would make it difficult for Usyk to pressurise the British heavyweight. We can expect The Gypsy King to use his superior weight advantage and tire out Usyk by clinching. And unlike AJ, Fury has a much more lethal jab and can work around the Ukrainian body and gain an upper hand early in the fight.

With that being said, Fury is a very bad matchup for the unified heavyweight champion as the British heavyweight is much more well-rounded than all the opponents Usyk has faced so far.

Do let us know in the comments section below who you think will win the undisputed title matchup between Oleksandr Usyk and Tyson Fury.