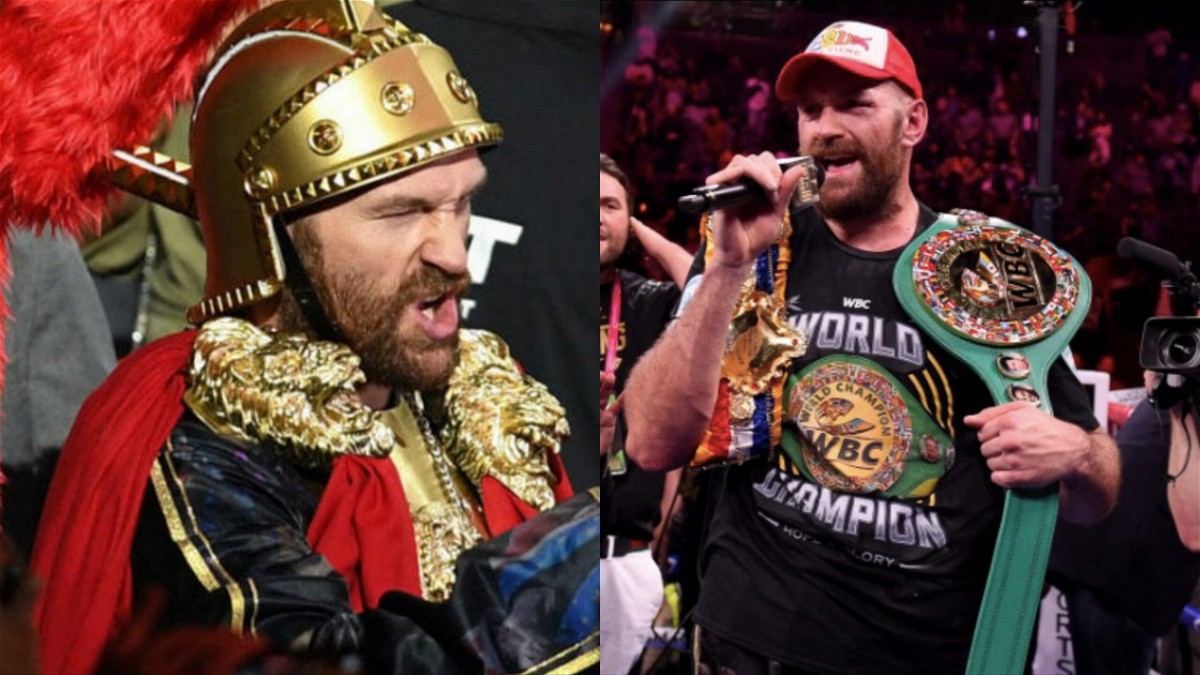 Tyson Fury will go head to head with Deontay Wilder on Saturday, 9 October. The trilogy fight between WBC and The Ring heavyweight champion,  Fury, and former WBC heavyweight champion, Wilder is all set to take place at T-Mobile Arena, Nevada. The Gypsy King has a lead in this trilogy as he defeated Wilder last year. The undefeated champion is known for being a great showman. Moreover, his epic entrances into the fights are even more spectacular to watch. Let’s have a look at Tyson Fury’s walkout songs that he used in his recent fights.

Tyson Fury’s walkout song at Fury vs Whyte in Wembley

Tyson Fury walked out to Juicy from The Notorious B.I.G for his heavyweight showdown against Dillian Whyte inside Wembley in London. The Gypsy King was welcomed with loud cheers from the Wembley crowd. Following Juicy, Fury walked out to Sex on Fire by Kings of Leon as the 90+ thousands inside the arena welcomes their WBC and Ring heavyweight champion of the world.

‘You shook me all night long’: Fury vs Wilder 3

Tyson Fury’s very last fight came against Deontay Wilder. It was the third fight of the trilogy between them and his entrance to the ring was spectacular.

He dressed up like a spartan and came down to the ring with AC/DC’s ‘You shook me all night long.’ The fight was perhaps the most entertaining among all three clashes. Despite being dropped by Wilder multiple times, Fury came back stop the American to win their series of fights via 2-0.

Fury walked out to the ring with the song ‘ Crazy ‘ by Patsy Cline and The Jordanaires to fight Wilder for the second time in 2020. The rematch between the two fighters had already made so much hype. Boxing fans all over the world were excited to see both the fighters who will win. Fury dominated the fight and dropped Wilder down twice to the canvas. Fury won the fight in the seventh round by TKO.

Fury walked out to the ring to fight Tom Schwarz in 2019. The world champion took inspiration from the movie Rocky 4. In the movie Apollo Creed, the fictional character used this song as his entrance song and Fury tried took this opportunity to try it. Fury finished Schwarz in a second-round TKO Won the WBO Inter-Continental heavyweight title.

Freed from Desire: Fury vs Wilder 1

Tyson Fury used the song “Freed from Desire” by GALA when he fought Wilder for the first time in 2018. During the fight, Fury managed to withstand two knockdowns but at the same time, he landed more accurate shots than Wilder. The fight ended in a split decision draw and the whole crowd started booing.

Live your life: Fury vs Seferi

The Gypsy King returned to the ring after a long three-year gap in 2018. He entered the ring with T.I and  Rihanna’s song Live your Life. Moreover, Fury outboxed Sefer Saferi and won the fight as Seferi’s corner called an end to the bout as he was getting brutally beaten by Fury.

I’m gonna have a little talk: Fury vs Klitschko

Fury entered into the match against Wladimir Klitschko in 2015 with the song ‘ I’m gonna have a little talk’ of Randy Travis. Apart from a stunning entrance, Fury won the fight by a unanimous decision and took home the WBA (Super), IBF, WBA, IBO, and The Ring heavyweight titles.