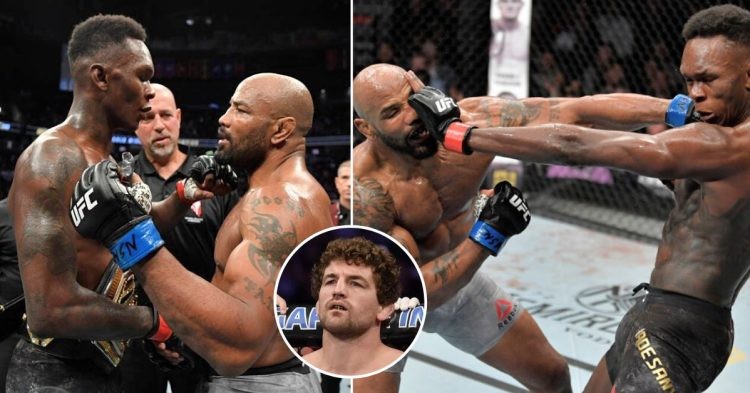 One of the most entertaining personalities in UFC today, Israel Adesanya defends his middleweight title against Paulo Costa at UFC 253.

Adesanya has beaten some of the best middleweights on the planet such as Robert Whittaker, Yoel Romero, Kelvin Gastelum, and Anderson Silva. While in all his fights Adesanya entertained the crowd to the fullest his fight against Romero was completely opposite. The fight had very less action.

Yoel Romero did not really show up and decided to take a cautious approach against Israel Adesanya. Though Adesanya tried to do some damage with his kicks the fight was mostly non-eventful. Israel Adesanya even received a ton of backlashes for his lackluster performance despite the win over Yoel Romero.

Former UFC welterweight and former Bellator champion, Ben Askren gave his prediction on Adesanya vs Costa in a recent interview with Submission Radio. He also looked back at the fight between Adesanya and Costa,. Ben Askren mocked Adesanya for the fight against Romero by saying:

“The one time I feel like Adesanya has missed with the crowd, that fight with Romero was lame. And he did not admit it when he said I f**ks up his leg. have you ever heard someone say that in your life. You sound ridiculous. And that’s like the only time he has missed.”

Though Askren criticized Adesanya for the Romero fight he believes that The Last Stylebender will be able to overcome Costa ta UFC 253. Ben Askren explained that the Israel Adesanya and Paulo Costa are pretty evenly matched. But, he also said that Adesanya’s superior striking will lead him to the victory against Costa.

Yoel Romero is a common opponent between Paulo Costa and Israel Adesanya. Both fights were very close on the judges’ scorecards. While Costa went to war with Romero for three rounds Adesanya fought smart and snaked a victory against Romero.

Considering that we can expect Costa to be big trouble for the middleweight champion. However, the only hole that can Adesanya look to capitalize on during the fight is Costa’s cardio. He usually slows down since he fights at a tremendous pace and volume. However, Adesanya will need to overcome the early rampage from Costa to take the fight to the championship rounds.