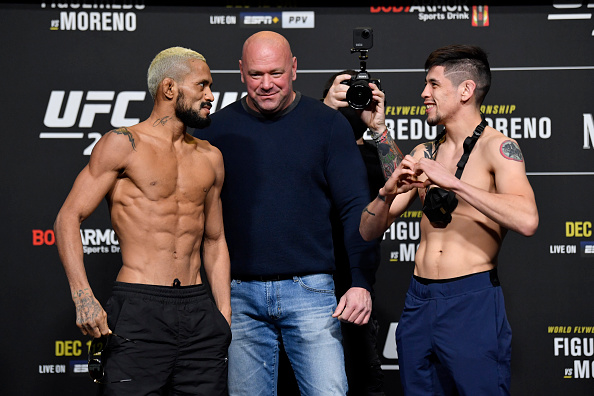 UFC 263 features a flyweight title fight between Deiveson Figueiredo and Brandon Moreno in the co-main event. The first encounter between the two turned out to be one of the best title fights in UFC history. And the fans expect nothing less of war from the rematch.

But can he get the job done this time and finish Moreno as he has predicted?

Read More: Was Deiveson Figueiredo vs Brandon Moreno 1 a robbery?

In the first fight, though Moreno managed to get a draw against the dominant flyweight champion, he could not win enough rounds. Figueiredo comfortably won the early rounds with Moreno winning the second round. Moreno was able to win the 4th round and Figueiredo won the final round.

Figueiredo has insane power for a flyweight and it was obvious in the last fight as well. Figueiredo was landing the bigger shots in the early rounds against Moreno. It’s hard to recall a moment from the first fight where either Moreno or Figueiredo was in danger of getting finished.

There were some big shots landed by both Moreno and Figueiredo but both fighters are extremely durable and can maintain a high pace for five rounds. Now if we consider that Figueiredo took the first fight on short notice, got hospitalized the night before the fight, and lost one point due to an illegal strike, it should be easy to predict the winner of the rematch.

The champion has a huge power advantage, good cardio, and ground game to win against a very tough opponent in Brandon Moreno. but, Moreno also took the fight on short notice and it seemed his left hand was compromised in round 5. And if it wasn’t for his injured hand we might have had a new flyweight champion at UFC 256.

Though Deiveson Figueiredo was not 100% coming into the fight he was certainly trying his best to finish Moreno in the early rounds. He even landed huge shots on Moreno but it’s needless to say that Brandon Moreno can take the best shots from Deiveson Figueiredo.

To win the fight, Moreno will have to weather the early storm and beat the champion with his output and ground control. Moreno can even go for takedowns early on to gas out Figueiredo. However, that’s a huge task against someone as good as Figueiredo. It’s very likely that Figueiredo will win the fight via decision or late-round TKO. But, it’s a close fight and if Moreno can take the fight to the later rounds he can win the fight with his high volume.