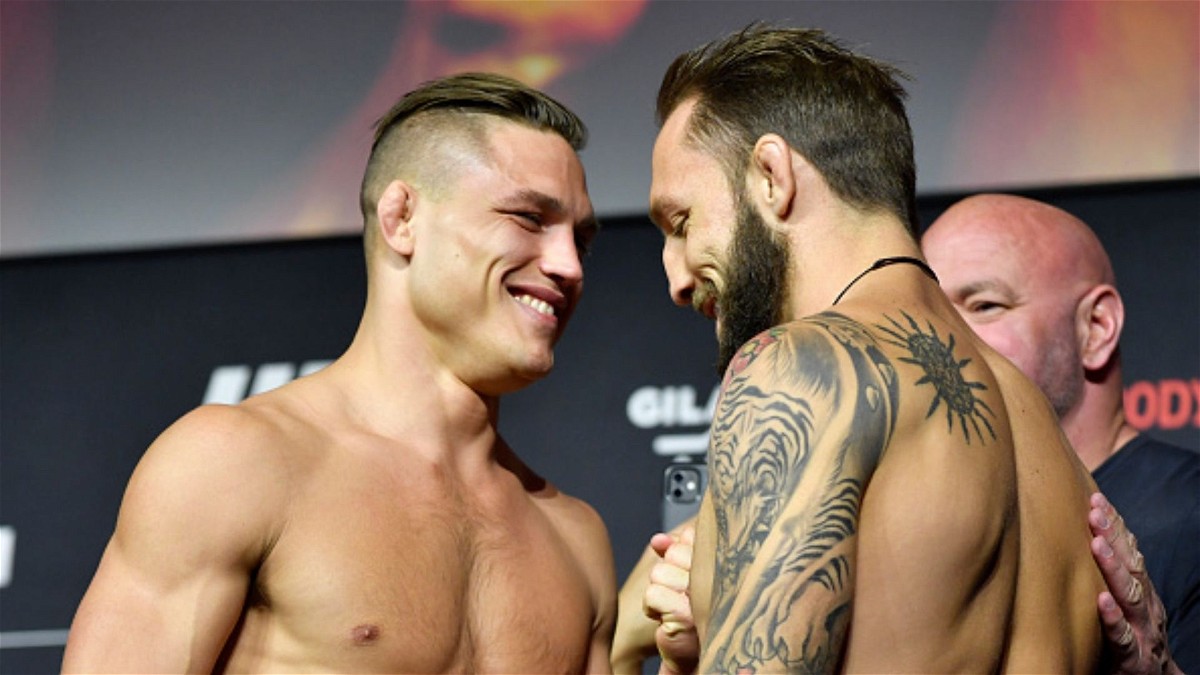 In what promises to be an exciting night of fights, UFC 263 will see a five-round featured bout for the first time in the history of the UFC in the form of Leon Edwards vs Nate Diaz. Needless to say, with Israel Adesanya vs Marvin Vettori headlining the main event, and the rematch between Deiveson Figueiredo set to the co-main event this weekend inside Gila River Arena, UFC 263 is as packed an event as they come. However, it’s not just the main card that promises exciting match-ups, the main event of the preliminary card between Drew Dober and Brad Riddell stands out as one of the most exciting fights in the entire card.

Needless to say, it’s a stylistic match-up and the fight between two of the brightest prospects in the division, Drew Dober vs Brad Riddell has everything going for it to emerge as one of the most entertaining fights at UFC 263. Let’s take a look at who gets his hand raised when everything is said and done.

Both Dober and Riddell like to rely on their striking ability to dominate their opponents. While Dober’s last performance saw him drop a submission loss to Islam Makhachev in what was a horrible match-up for the striker, Riddell could prove to be just the fight he must have been looking for after a dominant display of wrestling from Islam in his last fight.

Riddell, who himself was set to take on a wrestler in the form of Gregor Gillespie had to pull out of the card after Gillespie’s withdrawal from the fight. However, a fight against Drew Dober should not be a wind of caution considering it’s a match-up that goes in line with Riddell’s fighting style.

Also Read: UFC Fight Purse: How Much Did Nate Diaz Make for His “BMF” Title Fight Against Jorge Masvidal at UFC 244

Brad Riddell has the best team behind him and will step inside the Octagon having trained actively with another fighter from his gym stepping inside the cage this weekend in the form of Israel Adesanya. Riddell is an excellent addition to the striking department and the middleweight champion has credited Riddell as one of the finest in the game.

However, Drew Dober is not different and has a solid team to back himself in the form of Justin Gaethje. Dober is a close friend of Justin Gaethje and trains alongside him as his sparring partner during fights. It won’t be wrong to say that Dober must have learned a lot under a credible fighter in Justin Gaethje.

We don’t see this fight going to the ground, however, both the fighters could find themselves in the clinch position a lot. It will be interesting to see who gets the upper hand when both these fighters share the Octagon this weekend. We are going with Brad Riddell via way of stoppage in the first round.

UFC Fight Purse: How Much Did Nate Diaz Make for His “BMF” Title Fight Against Jorge Masvidal at UFC 244

The Only Fighter to Finish Stockton Slugger Nate Diaz