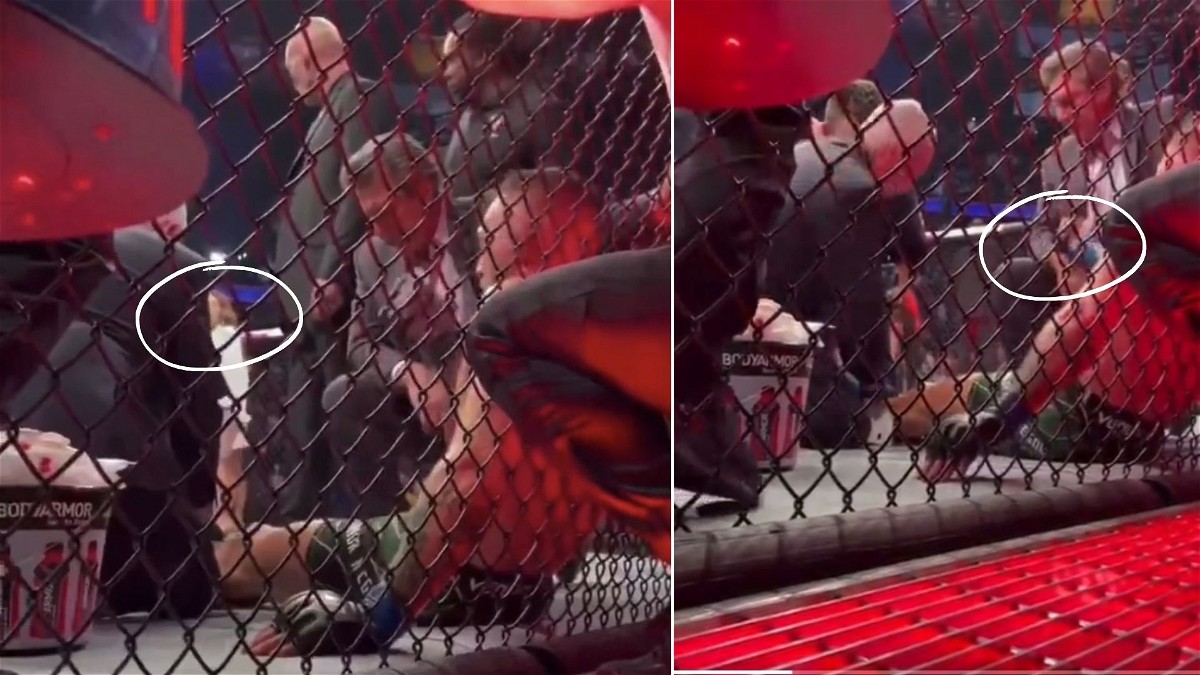 The aftermath of UFC 264 was of epic proportions. The Notorious Conor McGregor suffered a nasty leg break in the closing moments of the first round, and while one would have hoped for a calm demeanor from both the fighters after the unfortunate injury, that wasn’t the case.

While Dustin Poirier mocked McGregor by doing his billy strut as he was announced the winner of the fight, Poirier’s wife Jolie Poirier flipped off at McGregor as the former two-weight champion sat near the cage with the broken leg.

Needless to say, McGregor did not hold back either, sending a series of attacks, both personal and in anticipation of a fourth bout to take his “revenge.” “It’s not over,” McGregor screamed as Poirier was adjudged the winner of the fight in the epic trilogy bout at UFC 264.

Now, new footage has emerged where Conor McGregor can be seen making gun signs and threatening to kill Dustin Poirier and his wife in their sleep after the conclusion of UFC 264.

“In your sleep, you’re getting it, in your sleep you’re dead, you and your Mrs, it ain’t over,” McGregor can be heard saying.

Conor McGregor threatened both Dustin Poirier and Jolie Poirier in the aftermath of UFC 264. In the new footage from the Octagon side, McGregor can be seen screaming at Poirier and making gun signs at the lightweight contender.

NEW alternate angle of Conor McGregor threatening to kill Dustin and Jolie Poirier “in their sleep” and makes gun sign to his head:

Needless to say, the beef keeps getting bitter and bitter as time passes and with a fourth bout a very likely possibility, it’s safe to say that when McGregor returns, the fight will be of epic proportions.

McGregor has revealed that he has undergone successful surgery and will be in crutches for the next six weeks, following which he will start his recovery to get back to the Octagon.

It’s safe to say that McGregor is not leaving the sport, and plans to return in order to exact revenge for his recent row of losses against the former interim lightweight champion Dustin Poirier. While McGregor has stated that it’s business, this time around, it looks like the beef is real.