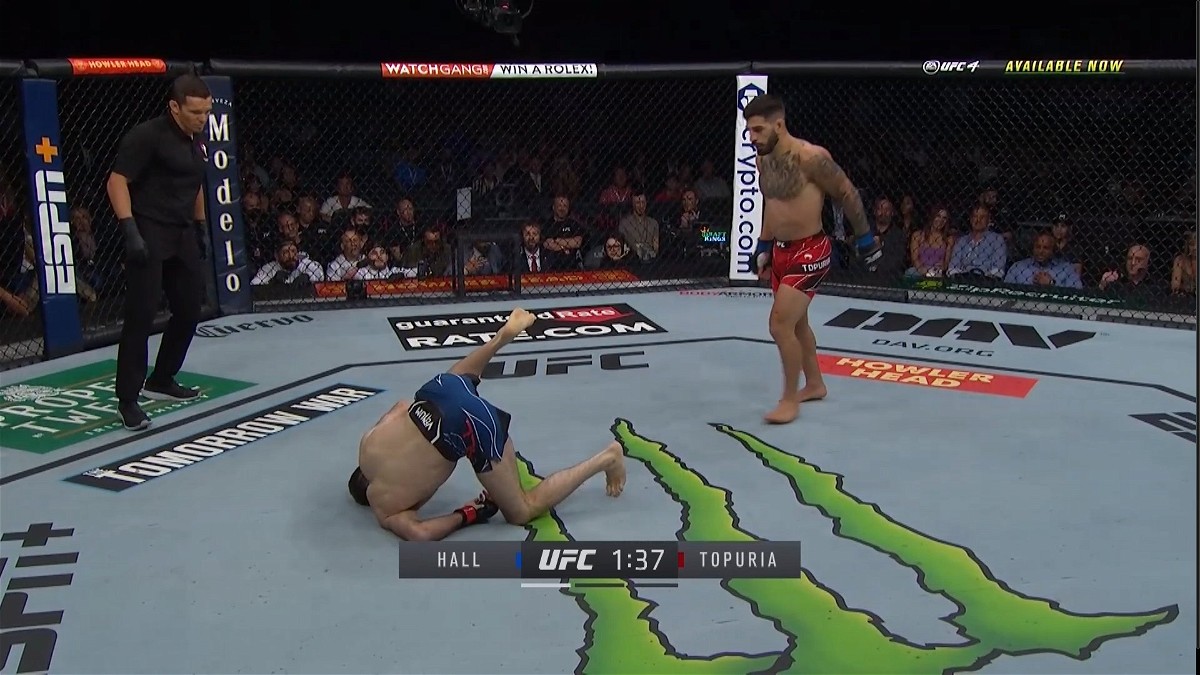 UFC 264 featured an exciting featherweight bout between one of the rising contenders in the division, Ilia Topuria, and the Jiu-Jitsu expert Ryan Hall.

Going into the fight, a lot of fans expected Ryan Hall to pull out an impressive submission on his return to UFC. Hall has been away from the action for over 2 years. So it was not going to be an easy task for Hall considering he was taking on Ilia Topuria, who is unbeaten so far in his career.

Besides that, Ilia Topuria is explosive early in the fight and is a good grappler himself.

The anticipation of this fight was high and in the end, the fans were not disappointed. Ilia Topuria put the featherweight division on notice with a KO win over Ryan Hall who is highly regarded as one of the best grapplers in the UFC.

Ryan Hall got caught and then got his face smashed! 😱 #UFC264pic.twitter.com/mb5jzhaPEE

Ryan Hall had a bizarre approach against Ilia Topuria

Ryan Hall’s approach to the fight was very unusual. He barely threw any strikes other than a roundhouse head kick that found its mark. Hall attempted multiple imanari roll without any setup and it seemed Hall had not much to offer other than taking the fight to the ground and looking for submissions.

This is where Ryan Hall got his gameplan pic.twitter.com/g2esL3yh1A

Though it seemed Ilia Topuria had a hard time early on dealing with Hall’s approach it did not take him long to land the perfect punch and finish the fight via brutal ground and pound.

With this win, Ilia Topuria is now 11-0 in his pro MMA career and he has shown the potential to do well in the star-studded UFC featherweight division.

On the other hand, the future of Ryan Hall in UFC does not look so good. He is 36 years old and he was away from the sport for 2 years. So it is highly unlikely that he will climb the ranking ladder in the near future and get to the top of the featherweight division.