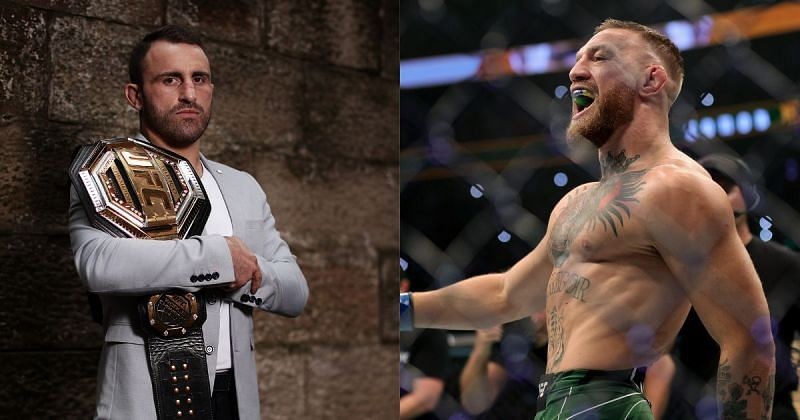 Alexander Volkanovski just showed the whole world why he is called “The Great” in MMA. Volkanovski beat Brian Ortega via unanimous decision and regained his UFC Featherweight Championship at UFC 266. The bout between Volkanovski and Ortega will definitely be in the ‘Fight Of The Year’ conversation. Both of these men gave everything they got and delivered one of the greatest title fight in the UFC history.

In the third round Ortega slipped a right hand which caught Volkanovski off guard and he landed on the canvas. T-City saw this opportunity and quickly went for a guillotine. He was cranking the neck of Volkanovski, but the Aussie came out loose. Ortega also went for a triangle choke in the same round, but Volkanovski again escaped.

At the end of the round, Ortega was heavily bruised up and there was a moment where it looked like the fight would be stopped, but the referee allowed Ortega to continue. Volkanovski and Ortega ended the fifth round on a banger and the whole crowd acknowledged the two warriors for their amazing performance.

#ANDSTILL !!!!???? @AlexVolkanovski retains the featherweight belt in an instant classic ????

Volkanovski was given the nod of the judges and retained his Featherweight strap. He is still unbeaten in the UFC with a record of 10-0 now.

A certain person was also watching the Volkanovski vs Ortega bout. The former UFC Featherweight Champion Conor McGregor was seemingly trolling the Australian fighter on his social media. Conor posted a rather funny tweet about Volkanovski, saying that he will kick Volkanovski’s head off like it was a rugby ball.

McGregor tweeted saying, “I’d kick this volovski head off like it was a rugby ball I was kicking. 5’4! And full of muscle! Hahahahaha little fart he is. Not even a little fart. A shart haahahahaj jackass .” McGregor later deleted the tweet and replaced it with “Not a bad fight. Congrats shartsy.”

Giving a post-fight interview to ESPN MMA, Volkanovski was asked to give his reaction on the McGregor tweet. To which “The Great” asked McGregor to come down at Featherweight and fight him. He also added that he is open to the option of fighting McGregor at Lightweight too.

“Something about sharting, farting, it didn’t really make sense. “It’s Conor doing Conor things, good on him. I’m not sure if he wants to come back down to 145 – well, obviously that’ll never happen.”

Conor McGregor is known for his shenanigans off the octagon and this time his target was Volkanovski. It would be interesting to see if this would lead to a possible match-up between the duo.
Do you think McGregor vs Volkanovski will happen? Let us know about your opinions in the comments section.