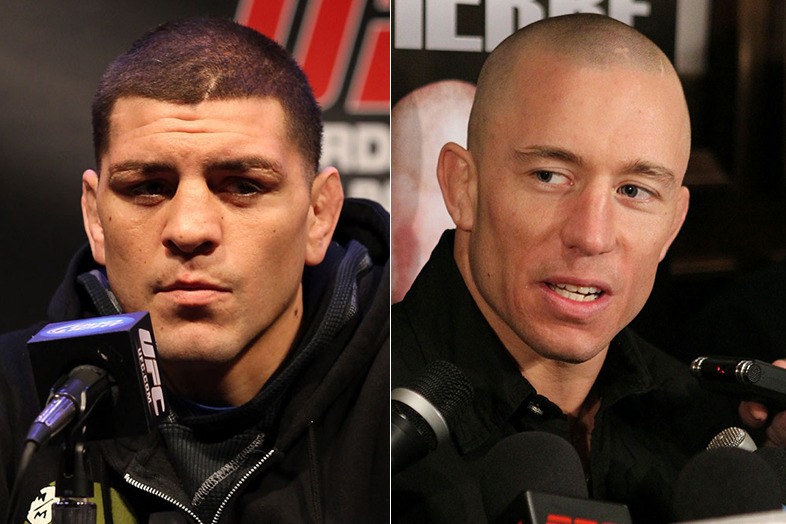 UFC legend Georges St-Pierre has basically accomplished everything that is achievable in MMA. He was a former two division champion in the UFC, having won the titles in the Welterweight and Middleweight division.

Many people have regarded The Canadian fighter as one of the greatest mixed martial artist in MMA history. There was really only one thing left for him to do, and that happened Thursday night when he was inducted into the UFC Hall of Fame during a ceremony at Park MGM.

Georges St-Pierre spoke to the media before the start of the ceremony, which included his induction into the UFC Hall of Fame. GSP weighed in on various topics, one of which was his former rival Nick Diaz’s return.

St-Pierre was asked to give his thoughts on Diaz’s return. GSP as classy as he is, said “I hope he (Nick) comes back better than he was.”

“Would he come back as good as he was or this layoff would it have a significant impact on him? I don’t know,” St-Pierre said. “I just hope that he will come back as good as he was. I’m afraid he left a lot of money on the table and I hope I’m wrong. I hope he comes back even better than he was and he goes for a shot for the title. I’m a huge fan. I really enjoy watching him fight.”

When Nick made comments days prior to UFC 266 which questioned his interest in fighting, it raised quite a few heads. But his former rival GSP defended his thoughts by saying, “I can relate to that. I hate fighting as well.” St-Pierre said to reporters.

“I did it because I used it as a benchmark to get me to where I want to get to in life. It’s the worst day of my life the day that I fight, but I used that to get me a life because I have the freedom, the health, the fitness, the wealth, the access of things that other people do not have.“

At UFC 158, Georges St-Pierre successfully defended his Welterweight title against Nick Diaz winning the bout via unanimous decision. Diaz will be making his return into the octagon against Robbie Lawler at UFC 266.

Let us know about your prediction for Diaz vs Lawler 2 in the comments section.