The card is stacked with amazing fights from top to bottom. From Ryan Hall in the early prelims to the return of Josh Emmett and ultimately the main event between two of the best lightweights of their generation, UFC 269 is shaping up to be one of the most exciting PPVs (Pay Per View) in the history of the Ultimate Fighting Championship (UFC).

The card was going to feature a grudge match between Jorge Masvidal and Leon Edwards. But Masvidal had to withdraw from the fight, citing an injury. Hence, the vast majority of the focus has shifted towards the main event of UFC 269. The champion, Charles Oliveira (31-8), will take on the No. 1 contender, Dustin Poirier (28-6).

Poirier is coming off two back-to-back stoppage wins against Conor McGregor. This will be his second chance to fight for the title. He last fought Khabib Nurmagomedov in Abu Dhabi on the UFC 242 card. Charles Oliveira will be looking to defend his lightweight title for the first time after winning it against Michael Chandler earlier in the year.

The fight promises to be an exciting one as both the fighters have great boxing skills. Poirier has outboxed Conor McGregor, who was touted as one of the best boxers in the UFC. Moreover, his kicking game is deadly, as he primarily used leg kicks to defeat McGregor in their second fight at UFC 257. Hence, his striking skills are well established. 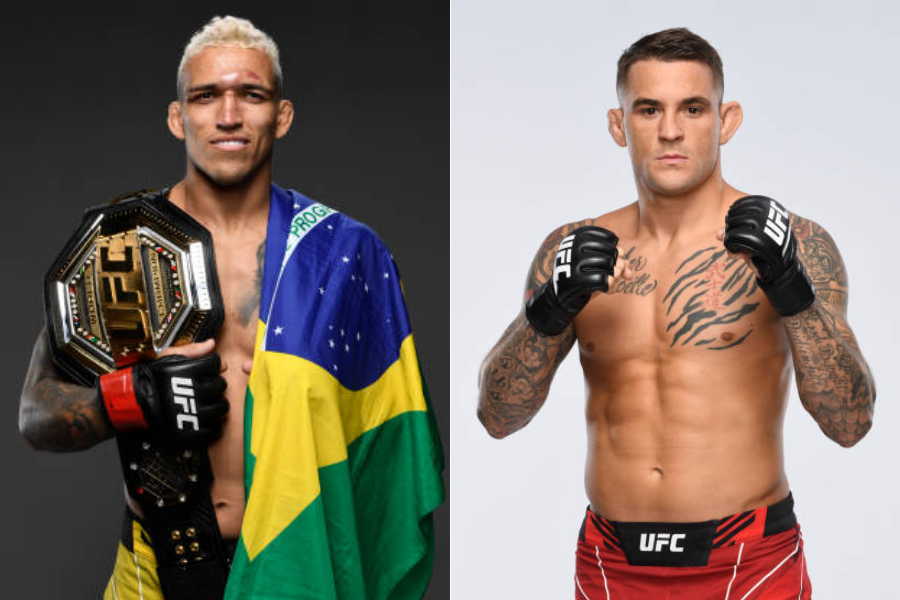 On the other hand, Charles Oliveira has an unorthodox style of striking. However, he will have a massive advantage when it comes to the ground game. Oliveira is arguably the most dangerous submission threat in all of MMA at the moment. Although he won the fight against Chandler via KO/TKO, Oliveira has won most of his fights via submission.

He holds the record for the most submission wins in UFC history. Dustin is susceptible to submissions, as was evident by the fight against Khabib, where he lost via RNC (Rear Naked Choke).

If Charles Oliveira can pass through Dustin’s guard, it could be an early night for him. However, if it is primarily a  stand-up fight, then Dustin Poirier has the power to put Charles Oliveira’s lights out. Poirier has a victory over former featherweight champion Max Holloway, who also has a win over the 155 lbs champion.

It is needless to say that it will be risky for Dustin to engage with Oliveira on the ground. Hence, keeping his distance and outpointing seems the most likely option for Dustin to win the championship on December 11.