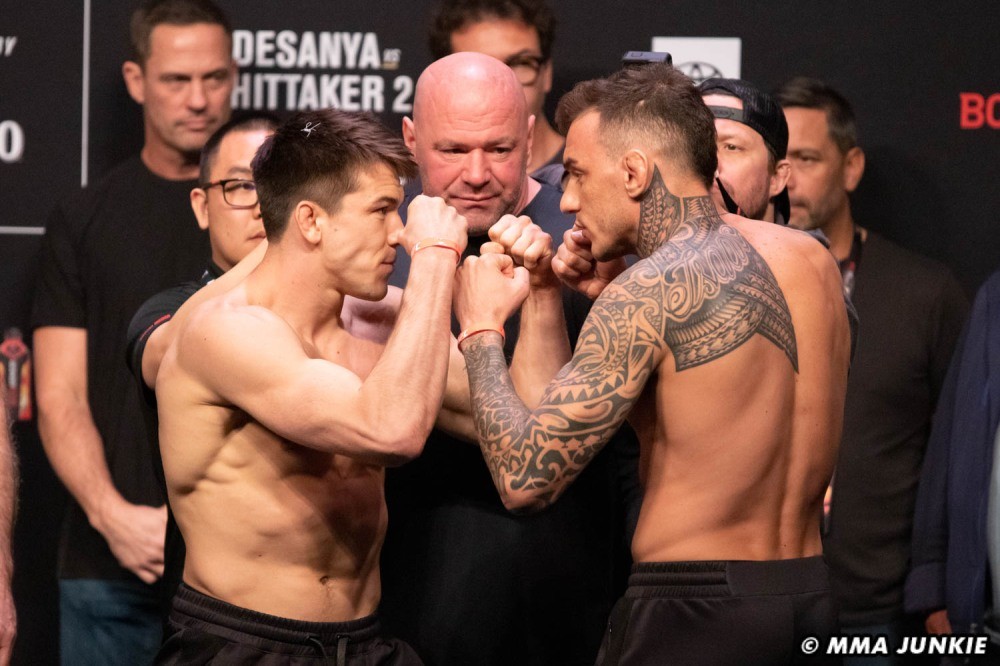 The upcoming UFC pay-per-view being held at the Toyota Center in Houston, Texas, features 2 hugely significant bouts in the middleweight division. These middleweight matchups have hogged the media spotlight. Meanwhile, the most stacked division in the promotion, the lightweight division, also has some exciting features. Namely, the Bobby Green vs Nasrat Haqparast fight and the Alexander Hernandez vs Renato Moicano fight. Let’s have a look at the latter.

The 29-year old American has had a mixed bag of results ever since he entered the promotion. He holds a 5-3 record in the UFC over 5 years of competing in the Octagon. While that hasn’t been enough to snag a top 15 ranking in the division, Hernandez continues his steady ascent. His most impressive win goes way back to his UFC debut on 4th March 2018 against Beneil Dariush. The Iranian-American fighter has since gone on to rank #3 in the lightweight division and faces off against Islam Makhachev in 2 weeks.

On the other hand, Renato Moicano has only won twice since 2019. Both submission wins came against Damir Hadzovic and Jai Herbert respectively. He seeks his 16th win in what will be his 21st career fight. He remains unranked too in the latest UFC division rankings, where the lightweight division as a whole didn’t see much movement.

While the older Moicano holds a slight height advantage, there is not much that separates the two fighters. In terms of experience too, they are both evenly matched, having 17 and 20 appearances in the Octagon, respectively. But their distinction lies in their style and that is what makes this a great matchup to look forward to. Renato Moicano is a black belt in Brazilian jiu-jitsu under coach Alex Leleco. He excels in controlling the narrative on the mat and dictating the pace of the fight. The Great Ape, contrarily, is an orthodox striker who will likely look to avoid all confrontation on the ground. And make every strike of his a significant strike.

Come UFC 271, at the end of 3 hard-fought rounds (or sooner), only one will emerge victoriously. Will it be a third-straight rear-naked choke win for Moicano or will Hernandez’s power have something to say about that?