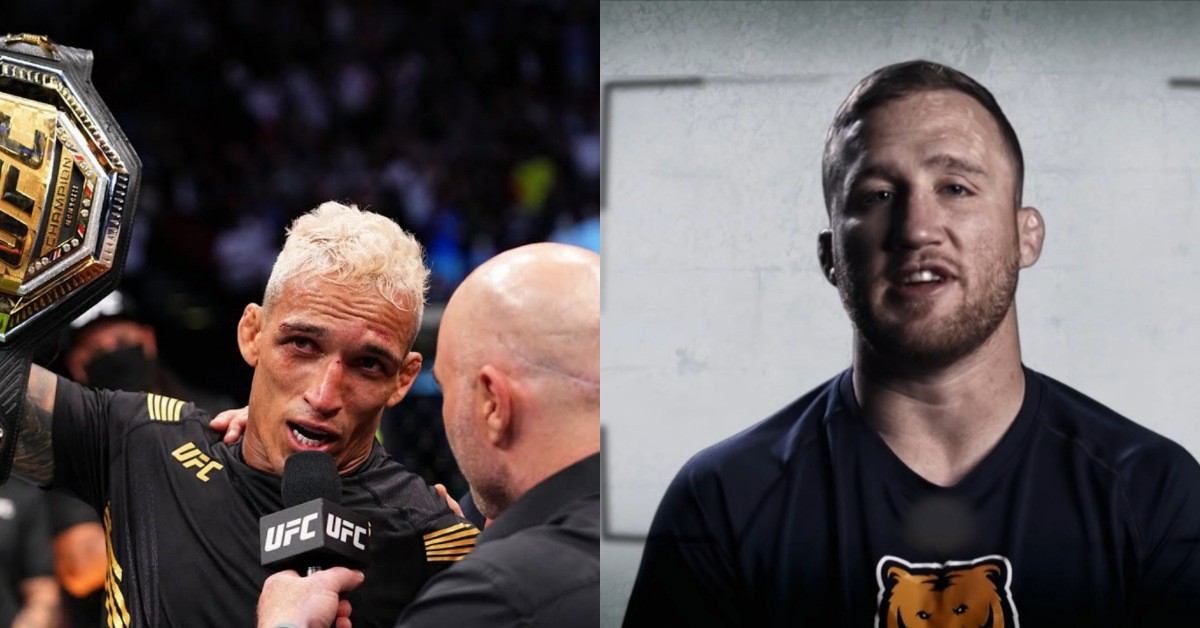 UFC Lightweight Champion, Charles Oliveira responds to Justin Gaethje’s comments about his being a quitter. In a recent interview, Oliveira revealed that he is not bothered about what Gaethje has to say. He is only focusing on getting the win on May 7th at UFC 274.

Ahead of the fight this weekend, Justin Gaethje sat down for an interview with ESPN. During the conversation, Gaethje labelled Charles as someone who quits easily. According to the former Interim 155lbs champion, Charles looks for a way out as soon as the fight turns ugly. Although he does admit that there has been a change in the 32-year-old’s mentality, Gaethje still thinks Oliveira may quit once he faces his power.

Fighters are often sensitive to trash-talk, especially when someone paints them as a quitter. But Charles Oliveira seems to be in a state of zen ahead of the big event this weekend. During his conversation with The Schmo, he was asked about his response to Justin’s comments. Charles said,

Charles Oliveira comments on what he wants his legacy to be

Charles Oliveira also spoke on what kind of a legacy he wants to leave behind. Do Bronx stated that he wants his story to be that of an underdog. Until very recently, he was almost always counted out even before the fights began. Throughout his career, nobody did him any favours. He had to earn the title shot after winning 8 fights in a row. That is what makes his incredible journey to the top even more special.

Born in Sao Paulo, the Brazilian champion grew up in extreme poverty. Although he has earned a lot in the last couple of years, Oliveira never really goes over the top to flaunt it. Instead, he engages in charity work to give back to his community.

The champ will have the opportunity to write one more glorious chapter in his legacy book on Sunday. Charles Oliveira is currently on a 10 fight win streak, which is the joint third highest in the division. With a win over Justin Gaethje at UFC 274, Oliveira will move a step closer to the second spot.

Tony Ferguson had a 12 fight win streak until 2020. While the former undefeated Lightweight Champion Khabib occupies the no. 1 spot with 13 straight wins in the 155lbs division. Can Oliveira reach all the way to the top? Only time will tell!