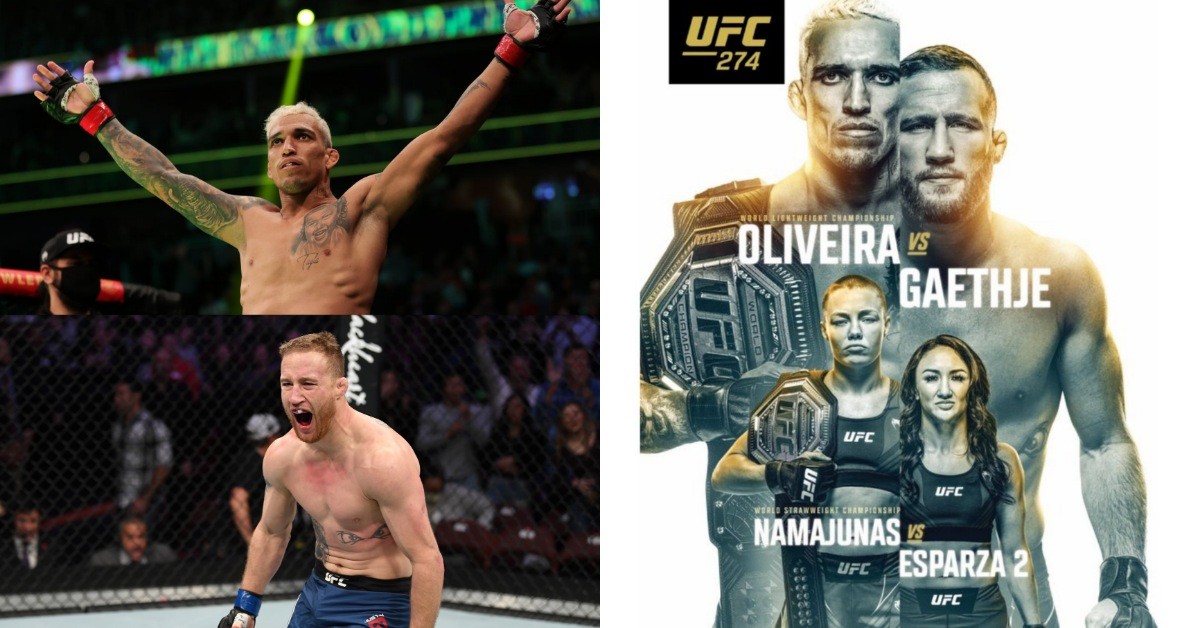 The Ultimate Fighting Championship (UFC) is back with its fifth PPV event of the year this weekend. Justin Gaethje will challenge the Lightweight Champion, Charles Oliveira in the main event of UFC 274 this Saturday.

Charles Oliveira retained his crown last year in December after beating Dustin Poirier via submission at UFC 269. Justin Gaethje on the other hand is coming off a hard-earned win over Michael Chandler at UFC 268. The bout was so entertaining that it was awarded the ‘Fight of the Year’ by CBS Sports in 2021.

Do Bronx is no stranger to entertaining fights either. He has collected 18 post-fight bonuses in his 12-year long UFC career. He also tops the list of fighters with the most submission wins in the UFC.

Neither fighter believe in having a defensive approach to their fights. As a result, the early rounds will be riveting to witness. The contest will certainly have the fans on the edge of their seats throughout its duration.

UFC 274 will take place inside the Footprint Center in Phoenix, Arizona on May 7th.

The card will also feature the return of the Strawweight Champion, Rose Namajunas. She will face Carla Esparza in the co-main event of the evening. The two previously fought in the finale of The Ultimate Fighter 20. Esparza got the win via submission and became the inaugural 115lbs champion.

Rose Namajunas will defend her belt against Carla Esparza in the co-main event of #UFC274 on May 7 in Phoenix, UFC chief business officer Hunter Campbell confirmed to @Marc_Raimondi. pic.twitter.com/ziWeVp9A96

However, 8 years have passed since then and Namajunas is the champ this time around. The 29-year-old champ will look to avenge her previous loss to Carla and continue her second title reign. Aside from the championship bouts, Tony Ferguson will also be on the card. He will fight Michael Chandler on the main card in a crucial lightweight contest.

UFC 274: How to watch Charles Oliveira vs Justin Gaethje?

In the USA: Fans from the United States of America (USA) can watch UFC 274 live on PPV. They can purchase the event exclusively from ESPN+. The existing ESPN+ customers can purchase the PPV for a reduced price of $74.99. While the new customer will have to pay $81.98. The main card will go live from 10 pm ET/ 7 pm PT on May 7th. The prelims and the early prelims will be available live on ESPN+ and UFC Fight Pass.

In the UK: British MMA fans will be able to buy the PPV for a price of £19.99 from BT Sport Box Office. The prelims and early prelims will air live on BT Sport 2 and UFC Fight Pass. The main card will start at 3 am BST on May 7th.

In India: UFC fans in India can catch the main card of UFC 274 live on Sony Sports Network and SonyLiv app for free from 8:30 am (ist) onwards. Due to the time difference, the event will take place on May 8th in India.

In Australia: The Aussie MMA fans can buy the event via PPV provider Kayo Sports for a sum of $54.95. Both prelims and the early prelims will be live on ESPN and UFC Fight Pass.

In Canada: Fans on the other side of the border also have the option to purchase the UFC 274 PPV. While the prelims and early prelims will be available live on TSN and UFC Fight Pass, fans can buy the PPV from various satellite TV sources such as Shaw, Telus and Bell for $64.99.