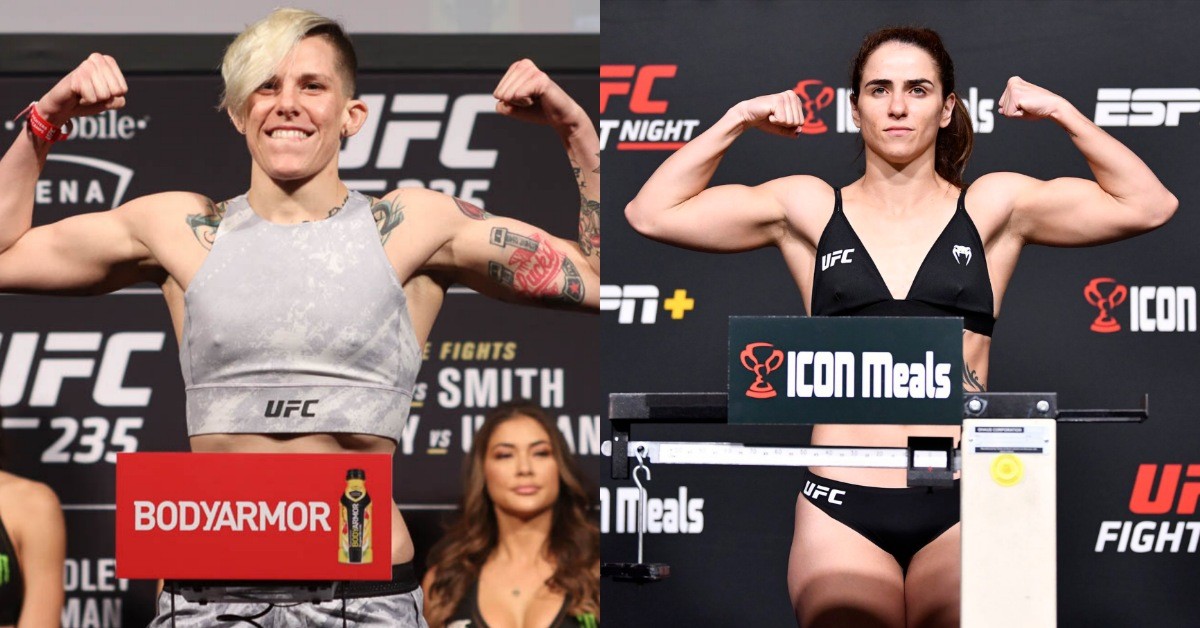 Macy Chiasson vs Norma Dumont at UFC 274. (Images via Twitter)

Macy Chiasson will fight Norma Dumont at UFC 274 this weekend. The women’s featherweight fight will occur on the preliminary card this Saturday. While Chiasson made weight, Norma Dumont weighed in half a pound over the limit of 146lbs. Hence, she will be fined 30% of her fight purse.

Despite her recent history of missing weight, Norma Dumont is coming off three straight wins. She holds victories over Felicia Spencer and Aspen Ladd. The former was a challenger to the 145lbs champ Amanda Nunes’ throne previously.

Macy Chiasson squares off against @NormaDumont5!

Macy Chiasson on the other hand lost to Raquel Pennington in her last fight via submission. She has 2 losses in her last 4 fights. But that may just be inconsequential in the end. She currently fights in the featherweight division which does not even have any ranking system. Hence, Macy can find herself in the title picture with a win on Saturday. The statement is true for Dumont as well.

Who will have the upper hand on Saturday inside the Octagon? Let’s take a look at how their stats stack up against each other.

Macy Chiasson made her pro debut for Cage Warriors in 2017. After her successful first fight against Miranda Dearing, Macy took part in the 2018 season of The Ultimate Fighter. In the finale, she beat Pannie Kianzad to earn a UFC contract. Although Macy is a good fighter with decent skills, she is yet to take the next step in her career. Her last fight against Raquel Pennington suggests that she may not be ready for the highest level just yet.

Her opponent, Norma Dumont may just be a step too far for Chiasson. Although Dumont has decent skills on the ground, her main strength is striking. She handily defeated Aspen Ladd who is considered to be one of the best in the bantamweight division. Can Macy find a way to beat such an opponent?

The 30-year-old will definitely look to maintain her distance and try to rely on volume punches. But it will be a long night for her if she stays in a pocket with Dumont. The fans can expect to see the bout last all 15 minutes as neither is known for their finishing prowess.