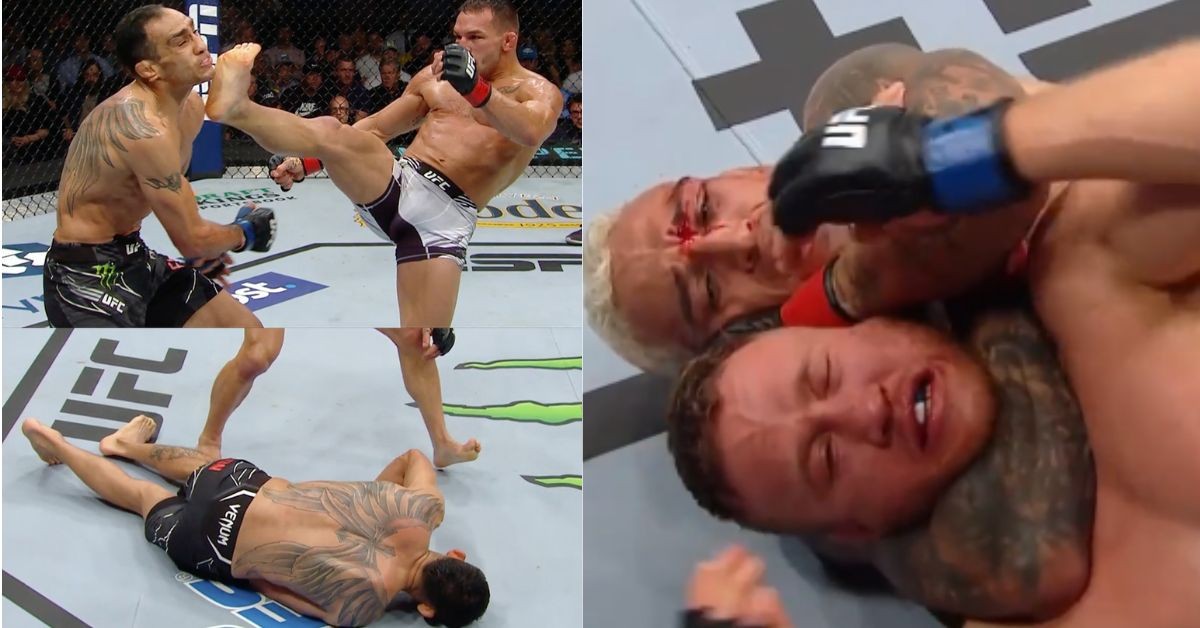 UFC 274 went down inside Footprint Center in Phoenix, Arizona. In what was a card filled with exciting moments and shocking results, Charles Oliveira emerged victorious at UFC 274 with a first-round submission win over Justin Gaethje. While the vacant lightweight title was on the line in the UFC 274 headliner, Charles Oliveira was ineligible to grab the gold owing to his weight miss at the official weigh-ins.

In the co-main event, a lackluster outing from Rose Namajunas saw her drop the title against Carla Esparza. In a five-round fight that saw Namajunas and Esparza in a mental battle inside the cage.

Michael Chandler became the first fighter to hand a KO loss to Tony Ferguson with a vicious front kick. The loss marked the first stoppage loss for Tony Ferguson, who also succumbed to his fourth straight loss.

Randy Brown vs Khaos Williams: Brown picks up a comfortable victory in the end

The powerhouses of the division Khaos Wiliams and Randy Brown shared the UFC Octagon to kick off the hugely anticipated UFC 274 PPV.

We don’t expect this one to go all three rounds 🍿@TouchNgo_ vs @KhaosOXWilliams opens the #UFC274 main card LIVE on E+ PPV NOW!

Fighting against the power of the Khaos Williams, Randy Brown always looked short. Williams hurt Brown with more than two minutes on the clock. However, Brown was able to avoid a stoppage loss.

Not just that, he came out much much improved in the second round. His movements, confidence, and range of attacks looked so much better than in the first round, that we couldn’t help but notice. Watch some segments here.

It was a close fight on the Verdict Scorecard, but Randy Brown won rounds 2 & 3.

The 3rd round was the closest round of the fight.#UFC274 pic.twitter.com/1mgn6J9K6a

After an incredible third round, Randy Brown picked up the unanimous decision victory.

“No idea why anybody would be booing that, it was a fantastic fight.” Joe Rogan said addressing the boos in the arena.

Both veterans shared the UFC Octagon in what was a fairly fair fight between both the light-heavyweights. Rua showed great heart and

First round in the books 📚

A visibly shocked Shogun Rua left the building immediately after the announcement. A case can be made for Shogun Rua, however, the majority of the audience seemed to be happy with the result. It was 1-1 going into the third round, and Saint Preux comfortably won the third in the eyes of many.

Michael Chandler became the first fighter to knock out Tony Ferguson after he executed a perfectly planted front kick that sent Tony Ferguson straight on the canvas. In the process, Ferguson suffered the first KO loss of his professional mixed martial arts career and his fourth straight loss inside the UFC Octagon.

Jesus get chandler back in there to do more backflips

Tony Ferguson leaves the cage after his #UFC274 loss and is embraced by Chuck Liddell. pic.twitter.com/zbTFIzX2IS

After an incredible first round from Ferguson that saw him drop Chandler with some incredible counter-punching, it was a shot that Ferguson didn’t see coming.

It looked like Rose Namajunas failed to execute her game plan as an equally calm and composed Carla Esparza got the better of her former adversary once again. With the victory, Carla Esparza is now a two-time strawweight champion.

This was the most 10-10 rounds we’ve ever received on Verdict.

It was certainly a very difficult fight to score.

Rose Namajunas won the fight on the Verdict Scorecard.#UFC274 pic.twitter.com/D2RigG7FAW

Carla Esparza upsets Rose Namajunas in one of the worst @ufc title fight in history. The former Champ was just bouncing around inside the OCTAGON without engaging her challenger. I am disappointed in @rosenamajunas #UFC274 pic.twitter.com/MXDdNyJVA7

It was a “boring” fight to say nonetheless, and it was evident from the reaction of fans both on social media, and inside the arena. What did you make of the co-main event?

Charles Oliveira vs Justin Gaethje: Oliveira submits Gaethje in the first round

In a slugfest and arguably one of the best one-round first in the history of mixed martial arts, Charles Oliveira got the better of Justin Gaethje with a first-round submission victory. Unfortunately, he didn’t walk out as a Champion after being ineligible to win the UFC gold after missing weight at the official weigh-ins.

Submitted Justin Gaethje in the FIRST ROUND 😧 #UFC274 pic.twitter.com/juBrHrSeLq

A thousand may fall at your side, And ten thousand at your right hand; But it shall not come near you.

Called it. Even if he knocked him down he too shit to be able to follow him down and do anything substantial. Always Charles’s fight.
Sorry @Drake should have posted 😂
But it’s my pleasure @DraftKings, add it to my take of tonight’s winnings. pic.twitter.com/RRuja6H3Ag

Gaethje dropped Charles Oliveira twice in the first two minutes, but it was a vicious left hook that dropped Justin Gaethje right on the canvas. It was only a matter of time before Oliveira secured Gaethje’s back for a rear-naked choke finish to close the show at UFC 274.

BREAKING: Brandon Moreno vs Kai Kara France for the Interim UFC Flyweight Title Is in the Works